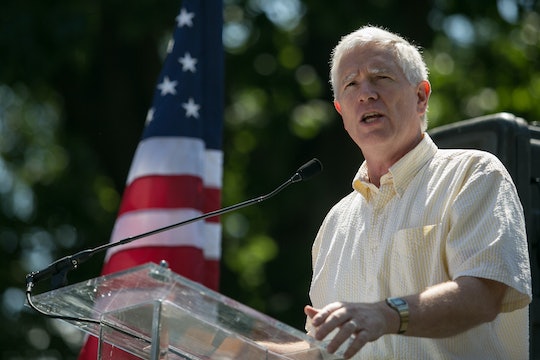 Mo Brooks Has Some Opinions About Pre-Existing Conditions

As Republicans struggle to come together on a health care bill, Alabama Rep. Mo Brooks and the rest of the ultra-conservative House Freedom Caucus have been fighting to repeal many of the protections of the Affordable Care Act. And on Monday, Mo Brooks explained his stance on healthcare in a CNN interview, saying that people who "lead good lives" should not have to pay as much for insurance. Those who don't lead the same "good lives" that make them unhealthy, should then pay more, according to his logic. Oh boy. Where to begin with everything that's messed up about that line of thinking?

First, the whole quote, in its compassion-free entirety. As Brooks attempted to defend rewriting health care laws to allow insurers to charge those with chronic illnesses or unexplained health problems more money, he said,

My understanding is that it will allow insurance companies to require people who have higher health care costs to contribute more to the insurance pool that helps offset all these costs, thereby reducing the cost to those people who lead good lives. They're healthy, they've done the things to keep their bodies healthy, and right now those are the people who've done things the right way, that are seeing their costs skyrocket.

(Romper has reached out to Rep. Brooks' office for a statement on his comments and is awaiting a response.)

Man, it's really annoying when little kids blithely go about getting cancer and driving up costs for the rest of us! If they only lived their young lives the right way, then they'd deserve quality, affordable health care!

Actually, why wait to start healthy living in childhood? Start it in the womb! A number of chronic illnesses that might not be considered preexisting conditions start at birth, but aren't caught until later.

Brooks makes an exception for those with preexisting conditions, and believes those people obviously fall in the "through no fault of their own" group that is deserving of healthcare. But his language does imply that those who are poor and make unhealthy choices (maybe they cannot afford healthier food or maybe they cannot afford preventive care for a chronic illness) or those who smoked when they were younger and developed cancer, do not deserve cheaper healthcare. The implication is incredibly problematic, because it assigns worth the lives of people depending on how they "chose" to live. But the major issue with that idea is that, often, people didn't choose to eat unhealthy food — they ate bought a $1 hamburger because it was cheaper than buying $10 worth of salad ingredients at the grocery store.

In all seriousness, plenty of people who lead "good lives" as defined by Brooks still come down with terrible diseases. Cancer doesn't discriminate. You can eat only vegetables, lean proteins, and whole grains, and go for a run every morning, and still get a disease that or develop a problem that might not qualify as a pre-existing condition.

Also, go ahead and call me a bleeding-heart liberal (wait, is that going to increase my premiums under Trumpcare?), but even if you haven't always made the healthiest choices in your life, you still deserve to be able to afford insurance. If you're a lifetime smoker, you do not deserve to die because you cannot afford care.

Perhaps Brooks should consider the idea that leading "a good life" might mean having a little more compassion for those less fortunate.

Correction: This article previously stated that Brooks said those with pre-existing conditions weren't leading "good lives," and thus should pay more for insurance. Brooks actually made an exception for those with pre-existing conditions, and believed they should have cheap access to care. Rather, Brooks' comments apply to those he believes have made unhealthy choices, whom would then have to pay more for healthcare. Romper regrets the error.