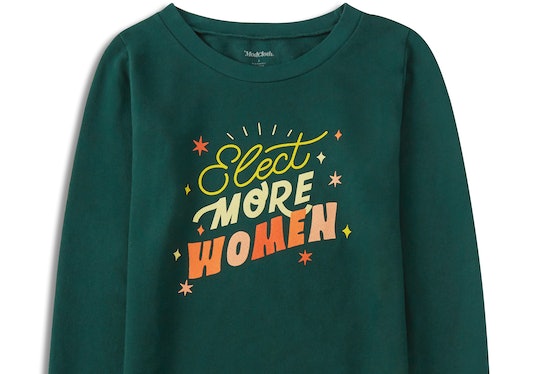 When you see a company selling a product for charity, you likely roll your eyes. At some point we've all been lured in by pink spatulas or red graphic tees, only to later realize that the proceeds from those goods were doing more for the company's bottom line than the charity that they were purportedly helping. That isn't the case with the Elect More Women sweatshirts from ModCloth, because they're giving away 100 percent of the proceeds from this shirt to the charity She Should Run.

In honor of Women's Equality Day on Aug. 26, ModCloth teamed up with designer Steffi Lynn to create this sweatshirt to fund grassroots organization She Should Run, which encourages women from all walks of life to run for public office. The shirt is available in sizes ranging from XS to a 4X, and is made with 100 percent cotton. Between Aug. 26, 2019 and Nov. 11, 2019, ModCloth will donate 100 percent of the purchase price up to a maximum contribution of $15,300.

The sweatshirt itself is a dark teal color with the words "Elect More Women" emblazoned upon the surface in warm salmon and yellow colors, and it's finished with crew detailing at the neck, sleeves, and hem.

She Should Run is both nonprofit and nonpartisan, and their goal is to see 250,000 women running for office by 2030, and they're well on their way. Their statistics are strong; the organization reported that "over 21,000 women have been inspired to run for office through She Should Run since the 2016 election," and that currently their incubator program — designed to help women achieve their goal of running — is assisting 14,000 women beginning their quest to run for public office.

Which we desperately need, there simply aren't enough women in office. The Center for American Women In Politics based at Rutgers University in New Jersey noted that across all areas of publicly held elected offices in the United States, there is no category in which women hold more than 30 percent of the positions. From the highest executive offices to state legislators to mayorships of small towns, women are underrepresented at every turn.

Without women in office, we know what happens: reproductive rights are scaled back, Title IX protections could be gutted, and gender inequality on the whole will be once again on the rise. Women and femme-presenting people make up roughly half of the electorate, so there is absolutely no reason that elected offices shouldn't reflect that.

But women know otherwise. They know the truth. Being a woman in politics is never going to be easy, That's why organizations like She Should Run are absolutely essential, and why I'm glad companies are supporting them like with the Elect More Women sweatshirt from ModCloth.

The testimonies of the women who have come through the program are stunning. Kara C., an incubator member, wrote, "The She Should Run Incubator came along at the exact moment I had finally decided to go for it and begin my journey to running for public office...When I reached out to She Should Run, I found exactly that - plenty of support, resources, and absolute faith from an amazing community of women who truly believe I can do this."

When you're buying the Elect More Women sweatshirt from ModCloth, you're helping to celebrate women, and encouraging them to hold to their own truths and share them with the world.

The sweatshirt is only available for a limited time, and once they're gone, they're gone, so make sure that you get over to ModCloth and order one today.