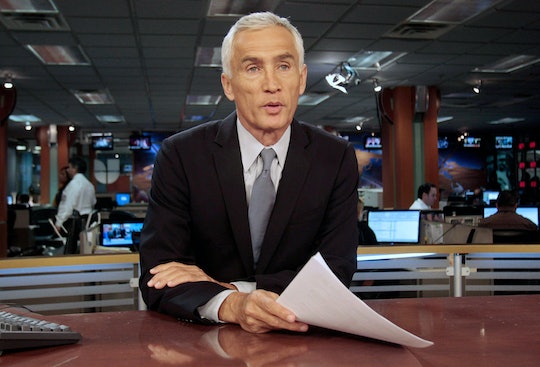 Those who tuned into the third round of the Democratic presidential debates probably noticed the event started off a bit differently than usual on Thursday. And it had everything to do with one of the moderators, who spoke in Spanish. That's because moderator Jorge Ramos opened the Democratic debate with a message for Latinos in America.

Ramos' monologue might have been short on Sept. 12, but it certainly left a big impression. “This debate is taking place at very difficult moment for Latinos in Texas and all over the country," Ramos said while looking directly into the camera, according to The Hill. "That's why it's important they know that we know that this is also our country."

His words come during a time when immigration continues to be a key issue dividing Democrats and Republicans in Congress. It's no secret that Trump's border policies — between the unhygienic conditions at detention centers, the separation of immigrant children from their parents, and most recently the U.S. Supreme Court allowing Trump's asylum-seeker rule to go into effect. Not to mention, Trump's hateful rhetoric toward Hispanics has also been labeled as racist — and has very real consequences. The El Paso shooter, who killed 22 people, wrote a manifesto ahead of his attack, warning of a "Hispanic invasion of Texas."

"Anyone who supports this is supporting racism," Buttigieg answered, to applause from the audience. "...The only people, though, who actually buy into this president's hateful rhetoric around immigrants are people who don't know any."

There was also his question for former Vice President Joe Biden about deportations under President Obama which was appreciated by many. Ramos brought up the fact that Biden served as VP in an administration that deported the most people ever in U.S. history. "You've been asked this question before and refused to answer, so let me ask it once again," Ramos pressured. "Are you prepared to say tonight that you and President Obama made a mistake about deportations. Why should Latinos trust you?"

One Twitter user wrote, ".@jorgeramosnews is what every moderator should be. Stone faced tough questions."

Another Twitter user went so far as to throw out an interesting hypothetical for future debate nights, writing, "What if: an entire debate hosted by Jorge Ramos."

Yet another person tweeted, "Jorge Ramos has been an exceptionally good debate moderator. He's raised crucial issues, posed tough questions & spread his queries around a lot to give each candidate time to talk. Also, him telling the Latino community: 'this is also our country' was brilliant."

So yes, the Hispanic community needed to hear Ramos' message ahead of round three of the Democratic debates on Thursday.