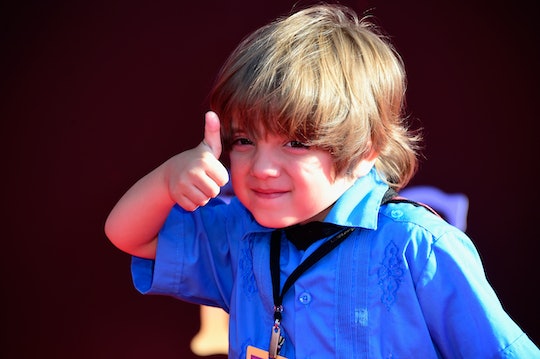 Listen, I don't care if you're not into red carpets, sitcoms, or even kids, because you're going to love this one (or else you're clearly dead inside): Modern Family's Jeremy Maguire wore a cape to the 2017 Emmys, and he is the hero we both need and deserve (OK, maybe don't deserve, given our current political climate) in 2017. Even better: this isn't a one-off, my friends: a cape is actually Maguire's signature red carpet look. The tiny actor wore a metallic red number to last year's Emmy awards, according to E! News, and he donned a silver knight-themed cape for the 2017 Screen Actor's Guild Awards. I'm not sure what I love best, if you're going to force me to be honest: this kid, his wardrobe, or his parents, for allowing him to be his awesome, authentic self on the red carpet.

Perhaps it's the "picture perfect" aesthetic the red carpet usually encourages during any and all award shows. I mean, sure: we all want to see famous people acting like non-famous people so we can feel better about our lives, but rarely do those moments feel genuine or sincere. Enter Maguire, who seems to be nothing short of his unapologetic, mini-human self while walking shoulder-to-shoulder with the greatest television actors and actresses of yesterday, today, and tomorrow. The next generation will save us, people. We just need to let them.

Now, for those of you who don't know, Maguire is best known for his portrayal of Fulgencio Joseph "Joe" Pritchett on the hit television show Modern Family. According to The Los Angeles Times, "the young actor joined the Modern Family cast in 2015, taking over the role from Pierce Wallace, who played Joe during the show's fifth and sixth seasons." But enough about this budding 6-year-old actor's career: let's talk about his cape! I mean, look at him. It's everything we could hope and dream to see on a Hollywood red carpet. And, clearly, Twitter thought the same. Just take a look at some of the reactions (in fact, some viewers didn't need to know who he was in order to fall in love with his look):

And while the cape is obviously impressive and worth acknowledging, can we talk about the fact that Maguire made his way to the Emmys in a car seat?! Where were you going, dear reader, when you were a 6-year-old booger-eating child, sitting in a car seat in the back of your parents' vehicle? Probably not the Emmys, I'm going to go ahead and assume. (Although, I also don't know anything about your life. I mean, maybe you're Drew Barrymore or some other equally famous person who was blessed at birth with an immeasurable talent, in which cased: Hi, Drew, and the rest of you wonderful, famous people! I love you!)

Unfortunately, there are already more than a few "us versus them" comments being made in relation to the young cast of Stranger Things (because apparently pitting young children against one another in a so-called "red carpet fashion" war is a thing we need in 2017) but who has time for that nonsense, right? If you ask me, there's more than enough room (read: not enough room in the entire world because the news is horrible) on a red carpet for adorable children to wear, flaunt, and love whatever the you-know-what they're wearing.

So whether it's 6-year-old Maguire in a blue cape, posing for photographers every time they yell, "Show us the cape!", or it's someone (literally anyone) else, who has the courage to feel themselves on the red carpet in front of millions, you do you, boo.