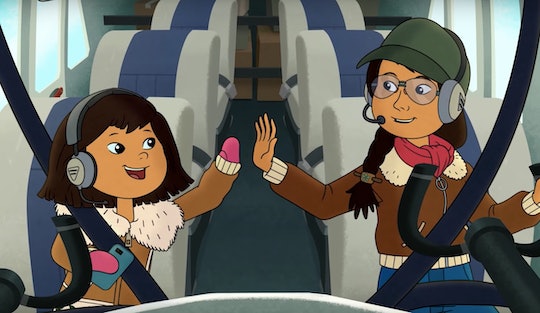 Representation matters. It matters for culture, for progress, and most of all, for kids of all ages to have characters in the media who they can relate to. Unfortunately, for too many years, the majority of entertainment has been whitewashed, representing life in a very singular, one dimensional way. Fortunately, though, times are changing and a new show is celebrating diversity in a pretty incredible way. In just a few days, children's show Molly of Denali will premiere on PBS Kids and it's being hailed as "groundbreaking" because it will mark the first time a children’s series will feature a Native American lead character on an animated TV show in the United States.

It's always exciting to see new and more diverse representation on television, particularly when it comes to LGBTQ+ inclusivity, characters who are not neurotypical, or in this case, indigenous peoples. Premiering on PBS Kids in just a few days on July 15, Molly of Denali is aimed to help kids, 4 to 8 years old, develop "knowledge and skills for interacting with informational texts through video content, interactive games, and real-world activities," PBS said in a press release.

The show will follow Molly Mabray's story as a 10-year-old Athabascan girl who lives in the fictional village of Qyah, Alaska. In each episode, Molly's adventures will be seen through the lens of "informational texts, including books, online resources, field guides, historical archives, indigenous knowledge from elders, maps, charts, posters, photos, and more."

On top of it all, Molly shares what she learns through a vlog, where she has a viewership featuring fictional kids throughout the rest of the continental U.S., and the world.

To ensure that Molly's culture was represented accurately, PBS hired Dewey Hoffman, an Koyukon Athabascan community advocate, to become one of the show’s cultural advisers, according to Alaska Public Media. "At first I was a little bit hesitant, thinking that, ‘OK, they’re gonna have one adviser to represent all Alaska Native peoples, all 20 languages, 200-something tribes,’” Hoffman told Alaska Public Media. “And that’s not real representation. That would be closer to tokenizing.”

Hoffman went on to share in the same interview that Molly will engage in everything from Native singing and dancing, to interpersonal dynamics such as trying to engage with her grandfather. "It’s really a triumph and something that shows how our people are constantly overcoming challenges," he told Alaska Public Media.

In addition, the network hired six Alaskan-native screenwriters, to be as thorough as possible in representation and authenticity, according to Indian Country Today. They were selected through a screenwriting fellowship, with the hopes of broadening the diversity in the writers' room and giving aspiring writers an opportunity.

Beyond portraying indigenous peoples, their culture and customs, the show is also inclusive behind-the-scenes as well, employing a team of locals and natives to most accurately represent them. It's an exciting moment for kids entertainment, because the more inclusive and diverse we can be, the better it is for everyone. Every child deserves a character they can resonate with, and everyone benefits from being exposed to different cultures, and deepening their understanding of how other parts of the world are.