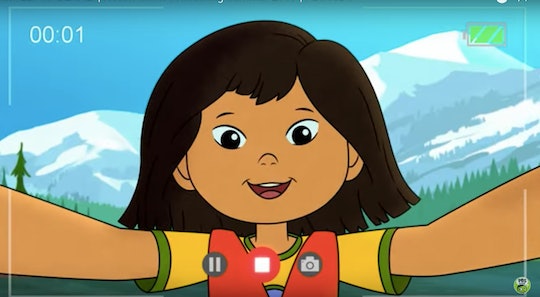 Princess Daazhraii Johnson was at home screening episodes of PBS Kids’ upcoming series Molly of Denali with her 8-year-old son when his eyes lit up. Johnson is the creative director of the show which, when it premieres on July 15, will be the first nationally distributed animated series with an Alaska Native lead. On screen, the titular character Molly’s mom was using an ulu, or knife, to cut up muktuk, whale meat eaten in traditional Alaskan cuisine. “His eyes got so big, he got so excited,” Johnson recalls of her son’s reaction. “It was such an awesome moment because we don’t see ourselves represented in the media at all.”

As a child, Johnson, who is Neets’aii Gwich’in, only recalls seeing stereotypical or negative representations of Native people in the media and remembers feeling ashamed when non-Native kids at school mocked the food she ate. “To see my son react that way,” she says, “celebrating and excited to see that food on screen was really like, ‘Yes, this is why we’re doing this.’”

The star of the series, curious, adventurous 10-year-old vlogger Molly Mabray is like Johnson’s son, proud of her culture. She lives a tiny fictional Alaskan village where her parents run the Denai Trading Post. Puffins, caribou, canoes, and dog sleds are all part of Molly’s world, which her Gwich’in, Koyukon, and Dena’ina ancestors long inhabited.

When people don’t see characters that resemble themselves or their culture in the media, it can limit their perception of their own possibilities. A 2015 study published in the Journal of Social Issues shows that when Native Americans are invisible in the media, represented as stereotypes or a homogenous group, it results in a lack of self-understanding, “creating narrow and limiting identity prototypes... and evoking de-individuation and self‐stereotyping,” the authors wrote. While media companies have been interested in showing non-white faces on screen, only recently are initiatives by media companies like NBC and Disney, being launched to create true diversity and representation behind the scenes.

They went north and hired Alaska Natives at every level of production — from indigenous voice actors like Tlingit and Muckleshoot actor Sovereign Bill who plays Molly, screenwriters, producers, production teams, advisers, to Alaskan children who act in the live-action interstitials

When the folks at PBS Kids and WGBH Boston started working on Molly of Denali, they knew they needed a new blueprint for giving marginalized groups like Alaska Natives a platform to tell their own stories. "We’re moving beyond tokenism to true collaboration,” says executive producer at WGBH Boston, Dorothea Gillim who co-conceived and co-created the show with Kathy Waugh. When they pitched the series to PBS Kids, Linda Simensky, vice president of children’s programming there, says, “I immediately thought, that’s the show we’re going to make. It’s such a compelling idea. I don’t usually have that reaction.”

“As a producer who is not an Alaska Native, there is no way we could tell this story authentically without those voices literally in the writing,” Gillim says. So, they went north and hired Alaska Natives at every level of production — from indigenous voice actors like Tlingit and Muckleshoot actor Sovereign Bill who plays Molly, screenwriters, producers, production teams, advisers, to Alaskan children who act in the live-action interstitials. Even the theme song features traditional drums and the Athabascan fiddle played by Yupik band Pamyua. “I think what this show tells us is that when we want to take this approach, we can do it right and we have a road map for how to do it right,” Simensky says.

Johnson was glad to have willing partners in PBS and WGBH. “You have to have people who can see the bigger picture and see why it’s important from an equity perspective, inclusivity, and getting to that point where we have more narrative sovereignty,” she says. By having Alaska Natives use their voices to tell their stories, “It really builds our own capacity within the entertainment industry… to hopefully continue to create our own original content and to build our capacity to do this sort of work.”

The show shares indigineous knowledge, intergenerational interactions, and other Native values, like respecting nature. Johnson draws on aspects of her own family’s life to inform Molly’s. For instance, Johnson’s mother attended Bureau of Indian Affairs (BIA) boarding schools, created to assimilate Indigenous children into “American” culture. Johnson had to learn her Native language as an adult because her mother had it “beaten out of her” at a BIA school. In a Molly of Denali episode, Molly, who does speak her Native language, learns that the reason her grandfather doesn’t sing and dance in the traditional way is because of his experiences at one of these schools. “The whole episode becomes about her reuniting her grandpa with the drums so that he can get his songs back,” Johnson says. Her grandfather goes on a journey of healing from the institutionalized racism he experienced as a kid to embrace and find pride in his culture.

It’s something kids are underserved in.

Molly of Denali is also the first television program to explicitly use the educational tool known as “informational text.” “One of Molly’s passions is to share information,” says Gillim, her Native name means “one who informs.” Through informational text, Molly takes information from all kinds of text or media — websites, photographs, radio programs, and train schedules included — and solves problems. “It’s a form of literacy and the idea is that informational text is any text whose purpose is to convey information. It’s something kids are underserved in,” says Gillim, “It’s all the ways we learn to navigate the world. Our hope is that kids across America will learn from Molly and be empowered to solve their own problems through the information that surrounds them.” In that same vein, her prequel podcast has been online since May.

Molly of Denali is not only an entertaining television program for any viewer that presents a new way for kids to learn, it offers an authentic reflection of the voices, values, and histories of Alaska Natives. That’s a lot to put on the shoulders of one small cartoon girl, but Molly’s a modern gal with all of the tools and support needed to teach a new generation of indigenous children about having pride in their cultures.