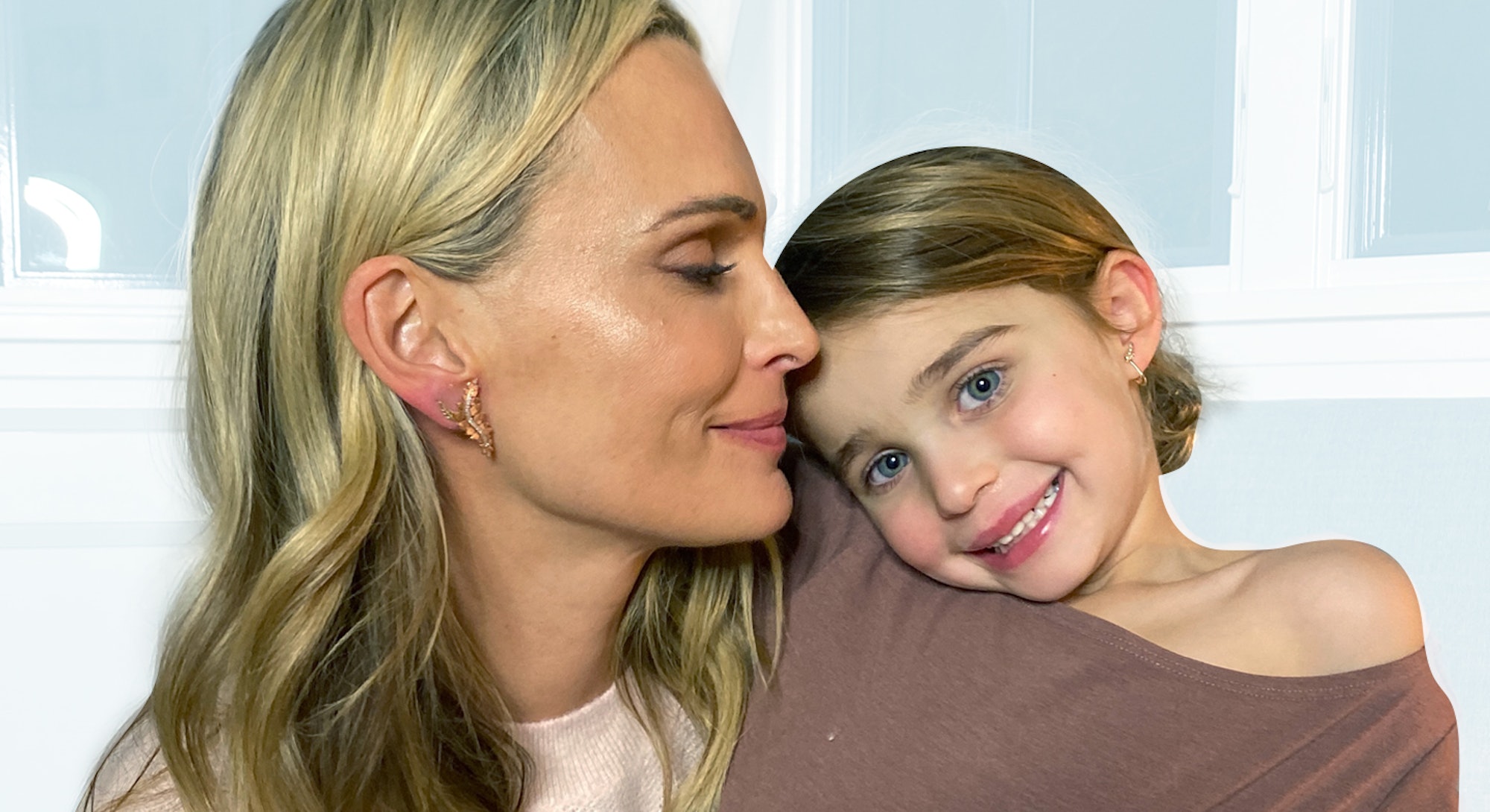 Molly Sims Is Handling Things The Only Way She Knows How

“They’re needy. They’re funny. They’re sweet. They’re crazy. And they eat a lot more sugar than they did pre-pandemic.” This is Molly Sims talking about parenting her three children — Brooks, 7; Scarlett, 5; and Grey, 3 — 24/7 as she shelters at home with her husband, producer Scott Stuber. It’s a lot.

The pandemic had already changed the terrain of everyday life when, in late April, Sims lost her mother, Dorothy “Dottie” Bone Sims, after an extended illness. She found herself in a void. “Loss has a way of silencing the noise that is all around us, and amplifying the moments and memories that live within us,” she wrote in an April 29 post on Instagram. Mourning has proven complicated. Sims finds herself isolated from a larger community of family and friends — she has been in a car once since March. Her mother’s public funeral has been indefinitely postponed. The national outcry over Black lives cut short by police violence provides another plane of grieving (and, for Sims, an opportunity for self-reflection and donation). At the same time, she is also never alone. “You have to have breakdowns in the pantry and the closet that you have to hide,” Sims says. “I saw her shirt hanging in my closet and I lost it.” Sims recently started seeing a therapist, with a specialty in children’s development, to help her cope. “I'm trying to do everything right,” she explains. “And telling them, that was really difficult.”

Dottie, whom Sims described as her “biggest cheerleader,” accompanied her 19-year-old-daughter, then a sophomore at Vanderbilt University, on the trip to New York that launched her career in the early '90s. After being signed to NEXT Management, Sims left school to pursue her modeling full-time. By the early 2000s, Molly Sims was a household name, hosting MTV’s House of Style, walking the runway for Victoria’s Secret, and appearing in music videos, Old Navy commercials, and on the covers of Harper’s Bazaar and Vogue Paris. Transitioning into acting, she landed a lead role on the series Las Vegas, where she played Delinda Deline for five seasons, and found a niche as the straight woman in big-screen comedies like Benchwarmers and Yes Man. The Wrong Missy, about a bad blind date that turns into an unlikely love story, premiered on Netflix on May 13 and is Sims’ first film in seven years. She was concerned the various filming locations would keep her away from home for too long. “They really worked well with me,” she says. “I was trying to do things from L.A. and be there limited times in Hawaii.”

Now that concerns about not being home have been replaced by the concerns of being home all the time, Sims has created a makeshift “sports camp” in her backyard to keep everyone busy. Camp Molly has soccer goals, a lacrosse net, a basketball hoop, kiddie pools, and a water slide that she says is the best $80 she ever spent. Sims has her eye on a second pool float. Right now it’s all about getting through, and some of the rules have been relaxed. There are more screens. Occasionally, there are bribes (Scarlett interrupted the interview to demand payment for an earlier chore). And, of course, there’s the task of running a kitchen. “I’ve never in my life fed 365 meals in four days,” says Sims, providing the soundtrack of Pandemic 2020: “Mom, mama, mom, mom, mom, mom. How many times can you say mom? Mom, mom.”

A recent Instagram post showed Sims casually working on her laptop and her three children pinned to the floor with bright pink tape. “They always tape me up,” she says. “They love taping me up, and I flipped it on them,” she says. “But I thought to myself, how many people are going to hate me for taping my kids to the floor?”

A few, it turns out, but criticism is nothing new to Sims, who says her career as a model inured to a barrage of hypercritical, often contradictory comments about her appearance “Your hair is too dark. Your hair is too light. You're too skinny. You're too fat. Your calves are too big. Can you have calf implants? You're too wide. You're too thin. Oh, you look a little old…” she summarizes. “Sometimes it gets to me, but it doesn't get to me the way it used to. I am so programmed that it doesn't hurt me that much anymore.” She’s learned that some people are just going to be rude, and that rudeness says really about them. “I mean, I'm Southern,” she says, “so bless your heart.”

Sims grew up in Murray, Kentucky, and still refers to the city (Kentucky’s 19th largest!) as “home.” Talking to her, hints of a drawl peep through every now and then. (She explains on her blog that her accent was “trained out of her” once she began hosting House of Style, but that it slips out from time to time.) The Southern grit endures. “I used to say to myself, ‘Oh, if it's meant to be, it's meant to be. Oh, well, it'll just all work out.’ But listen to me: Unfortunately, that's just something you tell yourself to make yourself feel better,” she says. “Things aren't always going to be great.”

Still, Sims is determined to find what she calls “the positives of the pandemic” (potentially, a rainbow pool float) and quarantine has helped her realize something about herself as a parent. “I'm pretty fun!” she declares. “The old girl's got some spirit in her.”