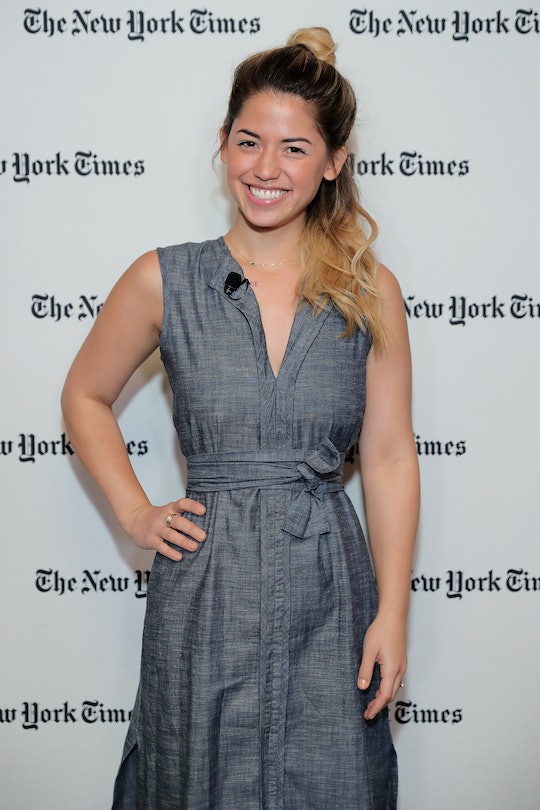 Talk about cravings! Cookbook author, blogger, and Food Network star Molly Yeh is now a mom. This is the first child for Yeh, 29, star of Food Network's Girl Meets Farm, and her husband, Nick Hagen. On Saturday, March 30, Molly Yeh gave birth to a baby girl. And her fist photo is simply delicious.

As People reported, the new mom took to Instagram on Saturday to share the exciting updates — along with a first look at her precious daughter. In the photo, her newborn is snoozing while wrapped in a blue blanket with rainbows on it and wearing a hospital hat with a bow. "Meet Bernie!! Bernadette Rosemary Yeh Hagen arrived promptly and calmly on her due date (today!) at 1:30am, weighing 7 lb 6 oz," Yeh captioned the snap. " We are so wildly in love! Bernie is named after Nick’s great great grandpa Bernt, who came from Norway and started the Hagen farm, and my great grandpa Bernard, who came over from Hungary. Rosemary was my mom’s mom. 💕 She has a full head of hair and loves to stick her tongue out just like this 😛. If you need me, I’ll be cuddling and smooching her all day long forever and ever. 💕❤️💕❤️💕❤️."

Take a look at her little nugget for yourself!

Yeh, who announced her pregnancy on Instagram back in November, as well as her due date of March, has been, well, just a bit excited. I'm kidding: The food blogger has been seriously joyous to become a parent. "I am so excited," Yeh revealed to People magazine. "I was made to make cute little lunches. I am so excited for that. I’m so excited to go to Disney World. I just really love kid stuff."

Known for her blog, My Name is Yeh, and Instagram account chock-full of delicious foodstuffs, Yeh is, actually, something of an accidental star. As she revealed to Bon Appetit, Yeh moved to Grand Forks, North Dakota with her husband in 2013 after they both finished degrees at Juilliard, and the couple decided to take on Hagen's family farm. Yeh, previously a casual recipe poster on a small blog she maintained in college, found herself with little to do. She worked the night shift at a bakery, where she learned to frost and make wedding cakes, but otherwise was searching for a creative outlet. In 2013, she posted a recipe for pretzel challah that went viral.

In 2014, she was nominated for a Saveur blogging award and suddenly agents started contacting her for a book proposal. In 2015 she was named a Saveur Blogger of the Year. Her cookbook, Molly on the Range: Recipes and Stories from an Unlikely Life on a Farm, was picked by the New York Times as a top release of 2016 and was the winner of the International Association of Culinary Professionals Judge’s Award, according to her Food Network bio. She was named to Forbes’ 30 under 30 list for 2017 and is a Juilliard-trained percussionist. Her TV show followed last year.

Naturally, Yeh, told People she first thought she was pregnant on a lazy Sunday at home, which is where she films her show. “Normally on Sunday, I bake bread and I do stuff around the house to prepare for the week, but there was one Sunday where I couldn’t do anything but sit on my couch and watch TV,” she says. “That was the first time I suspected it and I was like, ‘Hmm.’"

Clearly, Molly Yeh is over the moon for her brand new baby girl. Before we know it, I'm sure she'll be sharing baby food recipes, toddler meals and snacks, school lunch inspiration, and more, via Instagram. But for now, Yeh is exactly where she needs to be: Soaking in those delicious baby snuggles. Congrats, mama!