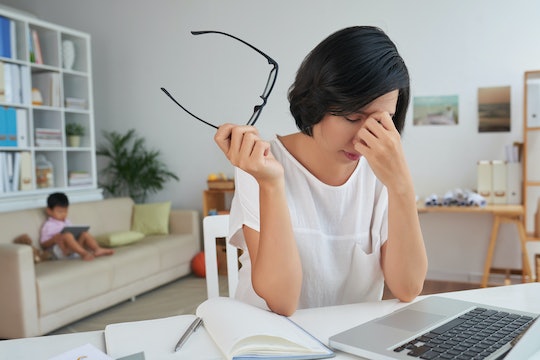 There's A Motherhood Penalty For Women In Academia, Too, & It's Totally Infuriating

While dad academics with small children tend to have more citations for their papers than academics without kids, the same can't be said for mom academics. In fact, female researchers with kids don't get cited as much as men or female researchers without kids, a new 10-year-long study says. In short: Female scientists with young children are not matching the citation levels of their male counterparts for a number of possible reasons, none of which are OK.

Researchers from the universities of Bath and Turin, plus the National Research Council of Italy, examined a decade of data on 262 male and female Turin-based academics' careers. And they explained that female academics "face motherhood citation penalty," according to the Times Higher Education World University Rankings, which means that motherhood is evidently linked to a drop in citations. But it's not just in Italy; the authors believe that their research has applications across a range of academic disciplines and in countries including the United States, the U.K., and China, where the allocation of research funding is also linked to management of elite networks, according to a university summary of the findings.

The results could perhaps be partially explained by stereotypical family roles, as "young fathers [take] on the role of the ‘breadwinner’ and their partners the domestic role,” according to “The Funding-Productivity Nexus in Science: Family and Other Sources of Endogeneity," recently presented at the Royal Economic Society’s annual conference. And because mothers are often tasked with the "domestic role," they may find themselves inundated with too many family obligations to promote their academic work, the researchers added, according to the university summary of the findings.

"The challenge of travel to international conferences and meetings to promote research findings alongside childcare responsibility is at the heart of the motherhood penalty, leaving quality research overlooked,” co-author Cornelia Lawson, a researcher at Bath’s School of Management, said in the university summary. She added that the research highlights the need for support systems for women with childcare responsibilities.

Fatherhood may also be correlated with higher citation rates perhaps because of fathers' "desire to provide for their new offspring" (though that seems predicated on gender roles that say fathers have more of a desire to provide than mothers do...), or it could be "reflecting a strategic decision to have a family when [fathers] feel their career is safely established."

Whatever the case, the fact that women's citations actually drop when they have children is not OK. Especially because female academics already face enough discrimination in their field, which has been ongoing for as long as women have been in academia. For example, women in academia earn far less than their male counterparts, according to the Times Higher Education World University Rankings. Students even apply the term "genius" to male professors at three times the rate for women, according to New Republic. In other words, male professors students like are geniuses, and female professors they like are "nice," perhaps because women professors are consistently more likely to be described as feisty, bossy, aggressive, shrill, condescending, and rude. The path to academia for many women in science, technology, engineering, and mathematics (STEM) ends long before they obtain a faculty position, according to The Conversation. And that may be because of the aforementioned pay gap and unconscious biases.

The researchers of this new study suggest that the European Research Council and the Research Councils UK (RCUK) address unconscious bias in funding allocation, and that the Athena SWAN Charter advances gender equality in academia, according to the university summary of their findings. They believe these would all be positive measures that could help female academics get their research cited and their voices heard.

Perhaps it's also key that we start seeing parents are equal partners with shared family obligations. Just a thought.