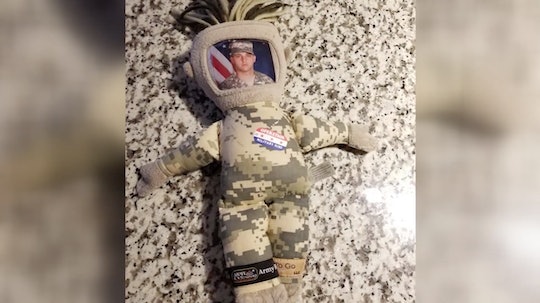 Every parent likely knows the chaos that ensues when a child loses a beloved-toy. While the experience can be traumatizing for the kid, it's often nothing short of a nightmare for the parent. That's why when a mom asked for help finding a missing "daddy doll," folks on social media jumped into action. Now, the hunt for one child's cherished keepsake has gone viral.

Ohio mom Jessica Osborne reached out for help on Facebook earlier this week when a comfort doll her daughter used while her military father was away went missing in Lebanon, Ohio. "She is devastated," Osborne wrote in a Facebook post published Monday. Osborne went on to explain that the doll "is a military stuffed doll with my husbands (sic) military picture inside."

"We use it often when he trains and she isn't able to see or speak to him," Osborne wrote. "Please...if you see this doll...I would be grateful for its return." While Osborne referred to the doll as a "daddy doll," it appears to actually be a Huggs To Go military plush toy. In a comment on Osborne's post, one of the company's founders promised the family would be "taken care of" if the original doll was not found.

According to Fox19, Osborne's husband is currently training in Virginia with the Kentucky National Guard. He's not expected to return home until August, the news outlet reported. And while a doll is no replacement for parent, the Daddy Dolls have been a comfort to Osborne's two eldest daughters when the family has had to be separated in the past. "I've noticed that it helps ease their mind when they can at least pick up the doll, hug it and see a picture of their father inside," Osborne told Fox19. "It brings a little more comfort to them and bed time is just a little bit easier."

On Facebook, Osborne said the doll may have been lost at or around LaRosa's Pizzeria or a Dairy Queen in Lebanon or on Route 48. In comments to her original post, she wrote that she'd since called both restaurants to see if the missing doll had turned up but had no luck.

While the Daddy Doll has yet to be found, Osborne's post has gone viral, garnering nearly 6,500 shares and more than 500 comments as of Thursday afternoon. Many commentators have offered to send Osborne similar dolls that their families had since grown out of or "retired" from use. Others have offered to fund the purchase of a new doll should the original not be located.

"The amount of love and support from the community and around the U.S. is amazing," The Cincinnati Enquirer reported Osborne said. "I've never seen so many people come together. We often see communities fall apart so thank you to each and every one of you for supporting us. We are so appreciative of you."

Still, Osborne doesn't appear ready to give up the search just yet. "I'm not ready to give up yet," she wrote in a comment on her post Wednesday. "After all the love and support from the community...I have to keep going."