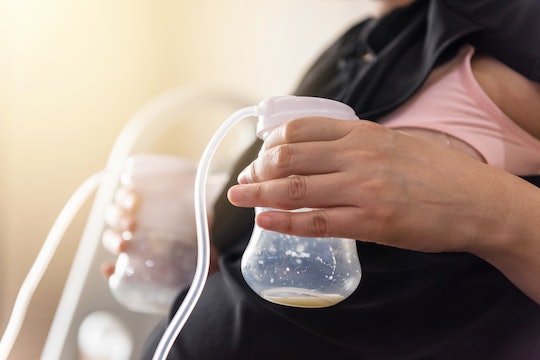 Following a jury's ruling, a Delaware mom was awarded $1.5 million in a breastfeeding lawsuit against Kentucky Fried Chicken (KFC), according to the Delaware News Journal. The suit claimed that the woman's boss and co-workers made it difficult for her to pump breast milk, which, in turn, caused her supply to dry up.

On Friday, Feb. 8, a jury awarded mom Autumn Lampkins $25,000 in compensatory damages and $1.5 million in punitive damages due to workplace discrimination, according to the Associated Press. The ruling comes nearly three years after Lampkins filed a suit in U.S. District Court in July 2016, claiming that her supervisor and fellow staffers at KFC made it difficult for her to pump breast milk at work, according to Yahoo Finance. Lampkins' alleged that the situation caused her "embarrassment, pain, and a decrease in breastmilk supply for her son," according to the Delaware News Journal.

Lampkins' law firm, as well as the owner of the KFC franchise, Mitra QSR LLC, where she was employed, did not immediately respond to Romper’s request for comment on the lawsuit.

After Lampkins' win, however, one of her attorney's highlighted the case's importance in relation to women's rights. “It was a great and long-fought victory,” Patrick Gallagher, said about the outcome, according to The Hill. “It’s a great day for women’s rights.”

Lampkin's road to victory was long and tough. Her journey initially started in 2014, when she was hired as an assistant manager at KFC in Delaware; the mom secured the job just months after giving birth to her son and she had chosen to breastfeed him, according to People.

In the suit, Lampkins claimed she was initially assured that pumping during work wouldn't be an issue. But during her time at the franchise, she reportedly said she was "only allowed to pump about once during each 10-hour training shift," according to The Hill.

Each person is different, but "lactation consultants often recommend that you pump every two to three hours, or 8 to 12 times a day" for a baby under three months, according to the website Exclusive Pumping.

When Lampkins did have the opportunity to pump, she was reportedly confined to a single-stall bathroom, the Delaware News Journal reported. But after that didn't work out, she was allegedly relocated to her manager's office "which had a surveillance camera that she was told could not be turned off," according to Yahoo Lifestyle.

Unfortunately, Lampkins' situation reportedly took a turn for the worse when training was over and she was transferred to a new location. The mom was reportedly demoted from her assistant manager position and was discriminated against by her co-workers and boss at the second store, according to People. The lawsuit stated that Lampkins' boss told her she was demoted because "she was pumping breast milk while at work," according to CBS Philly.

In addition to the reported demotion, Lampkins' suit alleged that her co-workers complained that she got "breaks" at work, which made her feel uncomfortable, according to the New York Post. The lawsuit went on to claim that the co-workers threatened to stage a walk out over the issue, according to the Delaware News Journal.

Ultimately, the court ruled in Lampkins' favor regarding her suit. Although the mom received a big settlement for her trouble, the U.S. Equal Employment Opportunity Commission has a $300,000 cap on compensatory and punitive damages against employers.

Money aside, this case marks a monumental win for breastfeeding rights in the workplace.

More Like This
Breastfeeding & Sex: Experts Explain What To Expect
Can You Burp A Baby Too Hard? A Pediatrician Shares Tips For Gassy Tummies
Amazon Just Launched A New Feature To Tip Your Delivery Driver $5 — At No Cost To You
Here Are Parents' Top Trending Searches In 2022, Because Google Really Is Our BFF