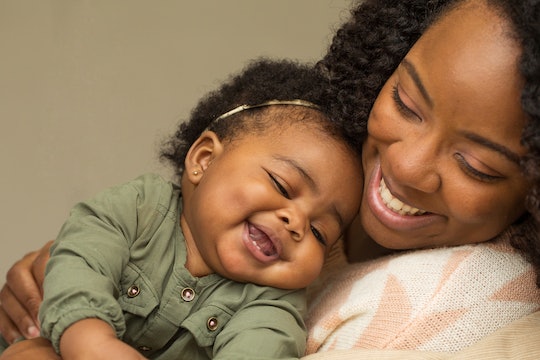 Mom & Baby Brains Sync For This Amazing Reason, According To Research

Ever wish that you knew what your baby was thinking? Or that they knew what you were thinking? As you stare into your baby's eyes in the wee hours of an early morning feeding, something magical is happening. You and your baby are joining wavelengths, according to a new study. That's right — mom and baby brains sync for this amazing reason.

The study, from the Cognitive Neuroscience Society, showed that a baby's brain syncs with its mothers when they are learning about their social environment.

In fact, the better the sync, the quicker a child learns, according to The Bump

"Despite the fact that this is such a powerful learning mechanism, surprisingly little is known about how the human brain performs social learning," Victoria Leong, of the University of Cambridge, said, per Science Daily. "When we connect neurally with others, we are opening ourselves to receiving information and influence from others."

Scans taken during the study showed that brain patterns from a baby that are most like their mother's tend to learn more rapidly, according to the Daily Mail.

In an experiment performed for the study, researchers learned that a mother's emotional response to a toy affected the baby's response as well. Both the mothers and babies were fitted with wireless EEG technology, according to Earth.com

The more the parents smiled, and held eye contact, the better synced the babies became, according to Science Daily.

Not much is known about wavelengths in connection with family units, like mothers and babies, but this study is a start, according to The Telegraph.

"We’re this massively social species and yet the field of neuroscience has focused on the brain in isolation," Thalia Wheatley of Dartmouth College, another researcher involved in the study, said, per Earth.com. "There’s this huge gap in knowledge about how our brains work in concert with other minds."

Researchers hope the findings will help encourage parents to be more emotionally present with the babies, according to The Bump. They also hope that the finding will someday help those in the educational sector. After all, humans truly are social creatures.

"I am interested in understanding what happens when parents or children fail to synchronize with each other, which may occur in certain mental health difficulties and developmental disorders, and the impact that this might have on learning and development in the longer term," Victoria Leong, study author said to the Science Daily.

Eye contact and non-verbal communication through smiles and cuddles seems to be a crucial part of a baby's development. There's nothing else like it.

"There is no substitute for being physically present and in the moment to connect with an infant," researchers said, according to Science Daily.

This is especially true since an infant starts to recognize his mom by sight as soon as four days of age. And eye contact remains the earliest form of communication mothers will have with their children, according to Allina Health's Healthy Set Go.

So the next time you feel guilty about playing with your baby instead of cleaning the kitchen, remember this. Your interactions are helping them learn.