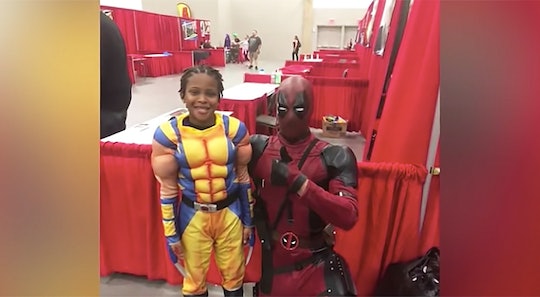 Parents are rallying around a mother who says bullying caused her 10-year-old son to take his own life, as ABC-affiliated television station WHAS11 reported. The mom — Tami Charles — claims her son, Seven Bridge's school didn't do enough to stop the harassment, and now she wants to draw awareness to this heartbreaking story.

Seven died of an apparent suicide on Saturday, Jan. 19, Charles told WHAS11. The student at Kerrick Elementary School in Louisville, Kentucky was reportedly upset about the bullying he allegedly endured from classmates, according to NBC News.

Charles revealed that her only child underwent 26 surgeries from the day he was born due to a medical condition, and that he required a colostomy bag at one point, according to People. Although Seven had the bag removed when he was older, he would sometimes have accidents, as WHAS11 reported. Kids would allegedly make fun of Seven because of this medical condition, his mom told the news station.

"Twenty-six surgeries," Charles said about Seven's tough situation. "He just wanted to be normal, that's all."

Sadly, the bullying allegedly turned into physical violence in September 2018 during a bus ride home. Seven previously told WHAS11 in an interview after the incident that his seatmate encouraged him to beat up another student who called him the n-word. When Seven refused, the seatmate allegedly started choking him, WHAS11 reported.

“I still can't get him choking me out of my head,” he told the station in September.

Charles accused the school's assistant principal of turning the other cheek when notified of the incident, stating in a Facebook video that previously went viral, according to Essence: “He said 'I talked to the bus driver this morning.' No referral, no incident report, no paperwork."

Seven's mom made a similar complaint following his death, alleging, according to CBS-affiliated television station WLKY: "We found that the school system had a lot of holes and a lot of inconsistencies with their policies about bullying. They stood on the verbal message, the lip service of zero tolerance, but they did not deliver."

JCPS' Communications Director Renee Murphy, said about the loss, according to The Hill: "We are devastated by this. Our hearts are breaking for this family. The school community is hurting right now.”

If you want to support Seven's family during this tough time, there are few options. Consider donating to a GoFundMe set up to help the "family with funeral and memorial expenses, lost wages, and to support Tami in finding justice and resolve for the death of her only child," according to the page.

Additionally, a memorial will be held at 3 p.m. EST on Saturday, Jan. 26 at Shively Park in Shively, Kentucky. "Seven's life will be celebrated with a balloon release," as WLKY reported.

Lastly, you can support anti-bullying organizations like Kids Against Bullying and Stomp Out Bullying, because no child deserves to feel unsafe and isolated at school.