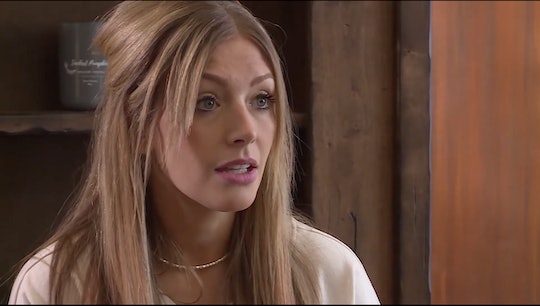 As most parents and caregivers can attest, few things are as stress-inducing as the cry of a hungry baby. But what happens if that anguished cry comes in the middle of the night, when you're alone with four other young kids, and no way to feed that baby? One Utah mom called 911 when her breast milk dried up unexpectedly and local law enforcement officers came to her rescue in a big way. Now, however, she's been facing backlash and criticism from folks who think she did it all for attention.

"I can't fault the strangers who don't know me personally for thinking I'm a bad mother," mom of five Shannon Bird tells Romper of the way some people have flocked to her social media accounts to condemn her for having called 911. "It's a crazy story. It's embarrassing ... to be in this position, but I agreed and I will see this through because I believe these men are my heroes and did an incredible service to me and my newborn baby."

According to Bird, that incredible service happened late last month when, after successfully breastfeeding all four of her older children, she found her milk supply hampered. "I've been calling neighbors and no one will answer," Bird told 911 dispatchers in a 2:12 a.m. call on Jan. 28, local NBC News affiliate KSL reported. "I've never been in this predicament ever. My milk just literally dried out. This is my fifth kid and this has never happened."

Because Bird had been exclusively breastfeeding she didn't have any infant formula in the house. With her husband out of town and four other young children, one of whom is in a leg cast, asleep, Bird felt she had no way of getting the formula her newborn needed. "I went into full panic mode," she told CNN, adding that she thought her milk may have dried up due to a combination of medications she'd begun taking.

When no other avenue for getting help turned up fruitful, Bird turned to 911, and, thankfully, Officers Brett Wagstaff and Konner Gabbitas of the Lone Peak Police Department responded. According to CNN, Wagstaff and Gabbitas initially delivered a gallon of milk purchased from a nearby convenience store to Bird as the dispatcher's notes had simply read "needs milk." Upon delivery, however, the officers realized that 6-week-old London was too young for cow's milk.

"We'll be right back with some formula for your baby," Wagstaff can be heard telling Bird on body-cam footage, KSL reported. After a run to Walmart, the officers returned with infant formula. "That's the same stuff we gave my daughter when she was first born, so hopefully it doesn't upset her stomach," body-cam footage showed Wagstaff said upon delivery. According to KSL, the officers would not accept money from Bird as compensation for the formula or the milk.

"I was not expecting them to go get that food for me," Bird told KSL. Instead, according to the news outlet, her initial idea had been to have officers do a patrol outside her home while she went to the store and her 8-year-old watched his sleeping younger siblings inside. She later told CNN the responding officers had gone "above and beyond" to help her when she was in need.

Wagstaff, however, told CNN that his infant formula delivery was just another part of the job, similar to helping a stranded motorist change a tire. "I don't think there's any officer in the world that would have acted differently," he told the news outlet. "We all got in this job for different reasons, but all the officers I know just want to help people."

And while some have condemned Bird for calling 911 for help, the Lone Peak Police Department doesn't appear to have been bothered by her call. In a Facebook post about Bird's call, the department said it was, "So very proud of our Officers and their dedication to duty." As for Bird, she tells Romper "the world could use some positive news."