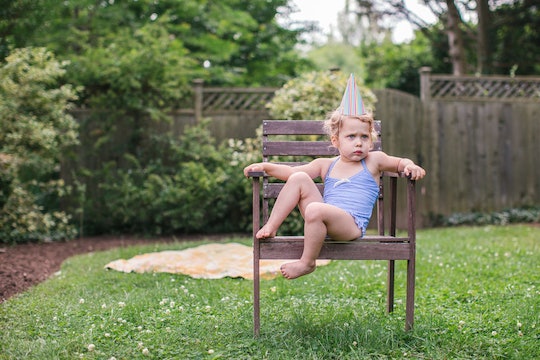 OMG, This Mom Charges 20 Bucks To Get Into Her Kid's Birthday Party Every Year

If you've ever thrown a kid's birthday party, you know it isn't cheap. Covering location, food, goodie bags, and entertainment for a gaggle of kids can cost hundreds — if not thousands — of dollars, which is why one mom charges $20 for her kid's birthday party every year... and while I probably wouldn't do it, I kind of get it. As the "Miss Conduct" column showed, however, parents who were asked to cough up cash to cover the cost of their kids at the party aren't keen on the concept.

Another mom anonymously wrote into the Boston Globe column about the woman charging for her kid's parties. She claimed that the mom "is lovely and kind and a truly wonderful person," but said other parents were talking about her "behind her back." The poster also noted that the mom in question is "not poor," but would seek $20 to cover each kid that attended her child's birthday party when it was held at a venue. When she held parties at her home, she put out a basket with a note that asked attendees to leave "donations," the letter explained.

"Every year, she charges people to come to her daughter's birthday party," the friend wrote. "If it is at a venue, the e-mail will say something along the lines of 'please bring $20 to cover the cost of your child.' If it is at her home, there will be an envelope or basket asking for 'donations.'"

Abrahams responded, and urged the woman to bring the issue to her friend's attention, but in a way that didn't make her feel attacked. The writer implied that the cover charge was uncouth, and the woman's daughter would "be humiliated" by her mom's actions once she was old enough to understand.

"Yes, oh yes. Don't tell her people are talking behind her back or say 'we all feel that way' — that kind of thing only makes people paranoid," Abrahams replied. "But yes, speak up before her poor daughter has to, since sooner or later the girl will realize what her mother is up to and be humiliated."

It's no secret that kids' parties, like all private events, are pricey. For reference, a venue near my home charges $310 for toddler parties Friday through Sunday, and an additional $30 for each kid over the maximum covered by the package. For bigger kids, the cost rises to $376 with an additional $30 charge for each child beyond the package limit. The prices continue to rise as you select other add-ons, like video game tokens, certain rides, and upgraded meals.

In a poll on Baby Center, parents were asked how much they dropped on their child's first birthday. A quarter of respondents admitted they paid more than $500. Forbes published an article on the matter in 2014 in which the writer — also a mother — noted that even when she tried to DIY a party for her child at her home, the total cost came to more than $600. The outlet suggested several ways to cut costs when it comes to putting together a kiddie bash, noting that the cost of a kids party ultimately doesn't matter to them so why go overboard? For parents looking to scale back on party costs, Forbes recommended avoiding often overpriced party stores, skipping out on food by planning parties for non-meal times, avoiding pricey entertainers, offering your kid a party or a big present, not trying to DIY a party, and focusing on what kids find fun. Some of those may seem like a given, but you'd be surprised how many parents fall into the same expensive traps year after year.

The fact of the matter is, if money is an issue in throwing your child a birthday party you shouldn't feel obligated to go above and beyond for the sake of those coming to the party. Kids are, more often than not, perfectly happy with the simpler things in life. In the end, they won't be able to tell the difference between a party that cost hundreds of dollars and one you put together for much less. Save yourself the stress, and potential embarrassment of ending up like the mom who charged a $20 cover for her daughter's party, and scale back.