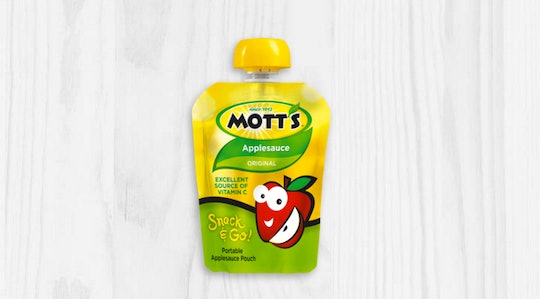 Don't Freak Out About Those "Moldy" Applesauce Packets Yet

An apple a day keeps the doctor away — most of the time. In a recent Facebook post, after grabbing a snack for her child, one mom claimed her Mott's applesauce packets contained green mold, and the internet promptly freaked out. Now, the company is investigating the claim to ensure that it's an isolated incident or to find out if any sort of widescale precautionary measures are required.

Alecia Bailey Cullum, a mom from Texas, posted a video on Facebook after reportedly discovering chunks of mold inside the pouches of applesauce she had been feeding her young son. Cullum was motivated to look inside the pouches after her son said his applesauce tasted "like poo poo," she said in the video. When she cut open the packet, which wasn't supposed to expire until August 22, 2017, she found green mold chunks, so she cut open another packet from the same box, and made the same upsetting discovery. She sliced open a third packet during the recording as her son held her camera, and seemingly found more of the same. "That's disgusting. I've been feeding my children this for years," she said in the video. "I'm thoroughly, thoroughly disgusted."

People who saw the video seemed to agree with her assessment, and shared it widely to warn other parents. The video currently has over 31 million views and counting, to Cullum's surprise. Of course, Mott's took notice and acted quickly and responsibly.

Mott's did not immediately return Romper's request for comment, but the company is taking the reports seriously, and doing some investigating. A Mott's spokesperson told Good Housekeeping this week,

Nothing is more important to us than the well-being of our consumers and the safety and quality of our products. We've analyzed samples held from the same production run and found no issues. We have also received no similar, related calls or complaints from other people that could be connected to the issue in this consumer's social media posts. Nevertheless, we are continuing our investigation and working to obtain the affected product from the consumer so we can inspect the packaging and determine a root cause.

This may be a larger problem with pouches in general. GoGo squeeZ, another popular applesauce maker, had to recall a bunch of pouches last year after consumers found mold in them as well. At the time, spokespersons for the company stated that GoGo squeeZ's parent company, Materne, was issuing the recall out of an abundance of caution. "Materne takes food safety matters very seriously," a spokesperson stated.

Luckily, in Cullum's case, her son is totally fine. According to Good Housekeeping, she took him to the pediatrician, who didn't find any adverse affects from the mold.

Here's hoping this is all cleared up quickly, and that everyone stays safe. In the meantime, if you're a worried parent, Mott's has advised consumers to call its help line at (800) 426-4891 or email consumer.relations@dpsg.com.