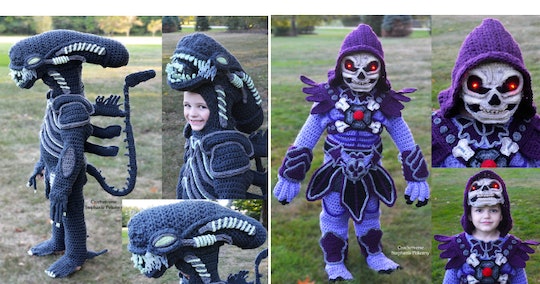 As convenient as store-bought costumes can be, nothing beats a homemade Halloween costume. One parent, however, is taking DIY to another level with her inventive and intricate costumes all made out of yarn. Really, one Ohio mom crochets Halloween costumes for her sons that are out of this world, keeping up a family tradition of homemade costumes that she enjoyed as a child.

"I started four years ago for my fourth son on just a whim," Stephanie Pokorny, a mom of four tells Romper of her crocheted costumes. "He was the caterpillar from Alice in Wonderland. "After that, they really seemed to like it so it has become a tradition now."

Pokorny, who runs the blog Crochetverse and sells some of her crochet patterns on Etsy under the same name, tells Romper that she's been crocheting since she was 16 after being taught by her grandmother, who used her skills to make lap blankets for her local veterans hospital.

"Each year, they tell me what they would like to be and I make it for them," Pokorny tells Romper, adding that she and her husband may subtly influence their sons' choices by introducing them to older era cartoons and movies. "A lot of time, it's is a character not from an era their own, but with all the original movies being rebooted these days, my husband and I often introduce them to the originals," she says. "We also watch a lot of older cartoons too!"

While Pokorny began crocheting costumes for her sons on a whim, handmade Halloween costumes are something of a family tradition. "My mom did it for me as a child and I vividly recall being so excited to wear them," she wrote in a blog post detailing her years of costume making.

Previously Pokorny has crocheted her sons a Predator costume, a Harry Potter costume, a Pennywise costume, a Slimer costume inspired by the movie Ghostbusters, ET, a smurf, a clown, a gnome, and even a Jason mask from Friday the 13th. All of the costumes she's crocheted have been done freehand, meaning Pokorny doesn't use a pattern to guide her but instead crafts the costume fully from scratch, trying it on her sons as she works to ensure proper fit.

"I spend about 50 hours on each [costume]," she tells Romper, adding that she tends to spread that labor out over the course of a few weeks. This year's costumes, for example, were each worked on for two weeks, Pokorny says. "In past years, I have worked on them up until last minute, but this year I decided to start early to be done and really not feel rushed and enjoy all the fun stuff we like to do for the season," she tells Romper.

Pokorny's hard work and attention to detail is evident. Each of her crocheted costumes are well thought out and elaborate, not to mention warm, a vital feature thanks to Ohio's crisp October temperatures. In fact, the intricate and innovative nature of her costumes make it hard to pick a favorite — even Pokorny's favorites keep changing.

"Each year I work to improve my skills to be the best I can be at my craft," Pokorny tells Romper, noting that every year her boys help her make that year's costumes her "best detailed" yet. "So, my favorite is always the last ones I made."

While most of Pokorny's costumes remain one of a kind, she has made patterns for a few available online for other parents who crotchet. And because parents should never be left out of the fun of Halloween costumes, Pokorny also has patterns for adult-sized costumes.