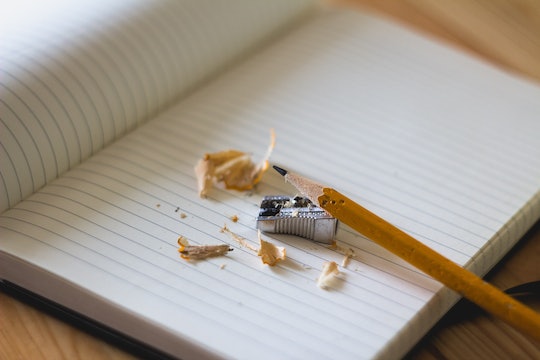 Parents know that kids, no matter their age, are constantly absorbing the messages and cues around them — and that no matter how subtle or well-intended those messages may be, they're likely influencing their children's worldview. So when one young New York student brought home an outdated writing assignment recently, her mom decided to take matters into her own hands and craft an edited version of the worksheet. The mom rewrote her daughter's sexist homework and — perhaps unsurprisingly — the result quickly went viral.

Last week, Lynne Polvino's 6-year-old daughter, Hazel, came home with a fill-in-the-blanks assignment where she had to choose words to complete a story. While Hazel happily worked away at the assignment, Polvino was less pleased with the assignment's narrative, which detailed a young girl's distress when her mother decided to return to work.

"The morning was terrible. Lisa had to get to school on time," the worksheet read. "Her father had to get to work on time. And now, her mother was in a rush, too."

In the story, Lisa's dad tries his hand at making breakfast and doesn't do a stellar job of it, and Lisa's not happy that she now needs to wash the dishes. But in the end, she "feels fine now" because her mother leaves work early in order to greet her after school.

Sure, telling kids that dads can't do housework and moms should feel bad for returning to work seems super feminist, right? It totally reflects 2017's modern families and the ideals we want our girls and boys to grow up with.

For Polvino — who is part of the 70 percent of American moms who work — the assignment's message was maddening. "In this day and age, we're going to tell kids that mothers working outside the home makes their children and families unhappy?" she told TODAY on Wednesday:

What message was it sending to little girls who dream of having careers and families? And what about all the other working moms — did they feel, as I did, like they’d been punched in the gut when they read this?

Mothers already put up with a hefty wage gap that fathers don't deal with, earning an average of only 74.7 cents for every dollar a dad makes, according to the U.S. Department of Labor. In 40 percent of households, moms are the sole or primary breadwinners. The idea that they'll be sticking around as stay-at-home moms until their children are school-aged, then leaving work early to care for their children, is simply unrealistic for most moms today.

Fortunately, Polvino — who works as a children's book editor at a publishing house — decided to channel her outrage into creativity, and she rewrote the story with a much more up-to-date message. In Polvino's version of the worksheet, Lisa's mom and dad both received paid parental leave and flex time, and Lisa spent her time after school at an awesome, federally-funded child care program. Polvino's version, which she posted publicly on Facebook, ended with:

Lisa was glad she was growing up in a society free of gender bias and misogyny. Lisa feels fine now.

Personally, I think Polvino's re-write gets an A-plus — and something tells me that as Hazel grows up, she'll give her progressive mom the same score.