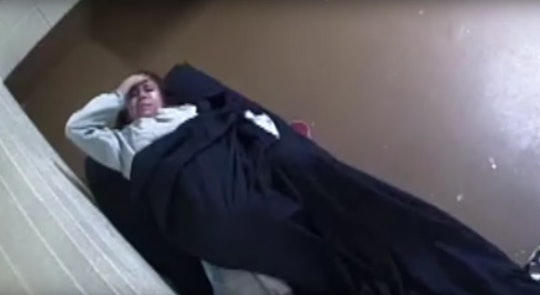 A little over a year after giving birth to her son, Diana Sanchez has filed a federal lawsuit alleging she was forced to give birth alone in her jail cell at the Denver County Jail, despite notifying deputies that her water had broke and contractions had begun. Sanchez's lawsuit comes eight months after an internal review conducted by the Denver Sheriff Department concluded that none of the involved deputies had done anything wrong. Court documents obtained by KDVR show Sanchez is suing both the city and county of Denver, as well as the Denver Health Medical Center and six individuals.

According to documents filed with the U.S. District Court in Colorado on Wednesday, Sanchez gave birth to a baby boy at 10:44 a.m. on July 31, 2018. "But what should have been one of the happiest days of her life was instead a day of unnecessary terror, pain, and humiliation that continues to cause her on-going emotional trauma," her lawsuit reads. Rather than being transferred to a local hospital, Sanchez's legal team has alleged that she was forced to give birth alone in her cell "on a cold, hard bench, feet away from a toilet ... with no medical supervision or treatment."

"I'm absolutely flabbergasted that a woman was in labor for hours and hours and hours, screaming in pain, her water had broken, she was passing blood — they were well aware that she was in labor and never ever called for medical care," Mari Newman, Sanchez's attorney, tells Romper. "It's not like childbirth is something that comes on and surprises you. You get a fair amount of notice."

Court documents allege the jail was given plenty of notice about Sanchez's labor. They claim Sanchez was booked into the Denver County Jail on July 14, 2018 along with a note from medical personnel that she was over eight months pregnant. The following day, a Denver Health Services clerk noted in Sanchez's medical record that she was "in the early stages of labor" as she was 30 percent effaced and 1 to 2 centimeters dilated with no contractions. On July 30, 2018, a Denver Health nurse warned Sanchez to immediately notify staff when her contractions began as she would need immediate medical attention.

But Sanchez's lawsuit alleged that little was done when, early on July 31, 2018, she alerted deputies at the jail that she'd begun experiencing contractions. No emergency medical transportation was arranged. No nurse or appropriate medical personnel assisted her in her cell. Instead, Sanchez was given an absorbent pad to lay on. Court documents alleged that Sanchez labored alone for nearly five hours despite repeatedly telling deputies at the jail that she was in active labor.

"The pain is indescribable," Sanchez told KDVR in an interview last year. "And what hurts me more though is that fact that nobody cared."

Footage from the surveillance camera in Sanchez's cell confirmed that no one came in to assist Sanchez until after she had already birthed her child, The Washington Post reported. "Sanchez endured the physical and emotional agony of childbirth alone, a few feet from a toilet bowl, on a thin jail mattress soaked with her blood and amniotic fluid, because the Denver jail staff and Denver Health nurses responsible for her care decided to risk her well-being and that of Baby J.S.M. rather than go to the trouble of calling an ambulance," her lawsuit reads. It also alleged that deputies and Denver Health staff were "not just negligent" but "deliberately indifferent" in their failure to provide her baby with "even the most basic post-delivery care."

"They put my son's life at risk," Sanchez told KDVR last year. "Like, at least him, he deserves a chance."

While a spokesperson for Denver Health, which is contracted to provide medical care at the city and county of Denver's two jails, tells Romper the organization can't comment on pending legal matters, he noted they're committed to providing quality care. "Denver Health provides high quality medical care to thousands of inmates every year," Simon Crittle tells Romper. "Our patients are our number one priority and we make every effort to ensure they receive the proper care."

And although the city and county of Denver also declined to comment on the lawsuit, a spokesperson tells Romper that relevant policies have since been changed. "To make sure nothing like this happens again, the Denver Sheriff Department has changed its policies to ensure that pregnant inmates who are in any stage of labor are now transported immediately to the hospital," the spokesperson says. But despite the reported change in policies, an internal review conducted by the sheriff's department late last year concluded that all involved deputies took the appropriate actions, meaning none faced repercussions for how Sanchez's childbirth was handled.

Unfortunately, Sanchez is not the only woman reported to have been made to give birth alone in a cell. As Bustle has previously reported, Tammy Jackson was allegedly forced to give birth alone earlier this year after undergoing nearly seven hours of labor in a cell at The North Broward Bureau, a special needs detention facility, in Pompano Beach, Florida.

But that's exactly why Sanchez and Newman are pursuing this lawsuit. "My goal in this and all lawsuits is to change institutional behavior so that these kinds of horrible things never happen again," Newman tells Romper. "There needs to be accountability when a jail that is obligated both morally and legally to provide medical care not just fails to do so, but then claims that there was no problem at all. I mean, enough is enough."