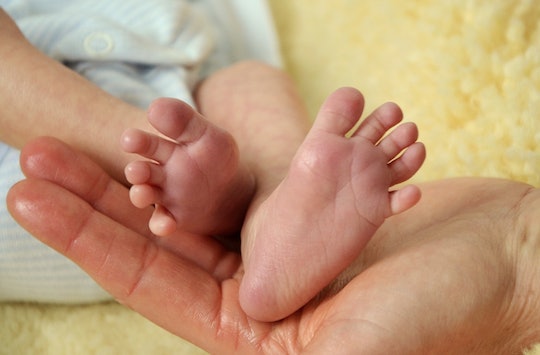 I'm about to make you feel way better about the 3-year-old french fries under the baby seat in the back of your car. Beth Newell, who just also happens to be a comedy writer, gave birth in the back of her Honda Fit, and the result was a hilarious mess. Come to think of it, it sounds a whole lot like a metaphor for motherhood. Baby and mom are doing just fine. Unfortunately, the same can't be said for the interior of the New York mom's car.

Newell and her husband Peter, along with their doula Silvie, were on the way to the hospital to deliver the baby when they trio realized they might have miscalculated the timing. They got into the car as soon as her water broke, according to BuzzFeed's report, but they couldn't get to the hospital fast enough.

"We quickly got into the car but didn't make it five minutes down the road before my daughter's head was out," Newell said in an interview with BuzzFeed.

So she did what needed to be done and had that baby girl, named Maeven, in the back of that damn Honda Fit.

But as soon as she realized she'd delivered a healthy, gorgeous baby girl, her attention turned to more practical matters. So she reached out to Honda to ask for help with this hilarious Tweet.

For what it's worth, I think Honda should totally give her a new car to celebrate the milestone. But apparently the car company can't just go around handing out cars. Boo! But the Tweet did get Honda's attention and the company reached out to see what it could do to help.

According to Newell, Honda said it would help with cleaning and it would replace the seat, so that's a pretty good score. Cool, Honda. But of course nothing happens online without trolls getting their say. Newell said she's already been accused of making the story up to get free stuff. I think the Reductress writer is probably just really good at making funny jokes about an incredibly wild birthing experience.

Again, I can't think of a better introduction to motherhood than a chaotic mess followed by the love and bliss of meeting your new baby, punctuated with a hefty swig of hater-ade and judgement from total strangers. Welcome to the club, Beth! Just wait until you try and breastfeed in public. Oy. But don't worry, with a sense of humor like that, you're going to be just fine. I hope the same can be said for the Honda's resale value.