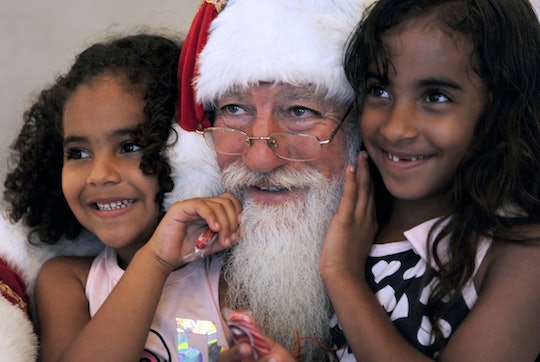 It's the most wonderful time of the year — except for those kids who might be privately struggling with the notion that Santa might not be real. The doubt creeps in as children start to piece together their world around them as they grow up. Eventually, any family who celebrates Christmas must address the inevitable with the kids, and it's a pretty defining moment when a little bit of that childhood naïvete starts to wear away. Except for one family, whose mom has an amazingly compassionate way of telling kids that Santa isn't real without the ensuing existential crisis.

Last month, Charity Hutchinson posted on Facebook her special way of telling her kids that Santa isn't real, and it's taken off like wildfire on social media, wracking up nearly 3,000 likes and nearly 6,000 shares. It's pretty brilliant all while keeping the spirit of Santa alive and tangible for children, even if the jolly old elf himself isn't real. Thing is, Hutchinson's approach takes some serious commitment beyond just one single conversation, as you'll see. She recommends starting the process when your child is around 6 or 7 years old, or "whenever you see that dawning suspicion that Santa may not be a material being." The rest of her strategy is pretty awesome.

First, Hutchinson says to take your kid out for coffee and while waiting for drinks, start the convo off with listing all of the ways your child has been a compassionate, kind-hearted kid over the last year. Then, you lay the magic part out for them by telling them they're old and ready enough to "become a Santa Claus." I personally love the way that she breaks the news that Santa the person might not be real:

You probably have noticed that most of the Santas you see are people dressed up like him. Some of your friends might have even told you that there is no Santa. A lot of children think that, because they aren't ready to BE a Santa yet, but YOU ARE.

Here's where the truly amazing parenting comes in: She engages her child in a conversation about what they like about Santa and what Santa gets in return for delivering gifts to children around the world. The goal is to lead your kid from the easy answer that he gets things like cookies to the broader idea that giving to others makes him happy. Once they come to that realization, it's time to encourage your child to become Santa themselves.

Hutchison encourages her children to pick out someone in their lives, typically a neighbor, and to surreptitiously find out something that they need, obtain, wrap, and deliver it without their knowledge. The tag should read "From Santa" but they can never tell the recipient that it was really them. "Being a Santa isn't about getting credit, you see," Hutchinson notes. "It's unselfish giving."

And that's what makes this particular method of the Santa reveal so awesome: It doesn't just break the news to the kid and leave them on their own to sort out their confusion — it gives them providence over their own innocence and understanding of the world around them. Hutchinson said the method worked perfectly with her oldest child, so much so that when it was time to "induct" her second child, her oldest tagged along for the all important opening conversation about becoming Santa.

They are both excellent gifters, by the way, and never felt that they had been lied to--because they were let in on the Secret of Being a Santa.

This is a much better way of finding out that Santa's not real than say, how I did: When I was 4 years old I got into a stupid argument with my older cousin, who got so mad that she shouted at me that not only was Santa not real, but neither was the Tooth Fairy or the Easter Bunny. That's some cold sh*t right there. Not that I still hold it against her or anything. I'm totally not still bitter about the whole traumatizing experience 30 years after the fact. TOTALLY.

Thank you, Charity, for bringing such a non-PTSD inducing way of breaking the news about Santa to the kids. Now it's time for parents everywhere to load up that Starbucks card and get ready to treat their sweet summer child to a cake pop or two. Now you too can have yourself a merry little Christmas as you spread the secret magic of becoming Santa to your very own little elf over flat whites and cake pops.