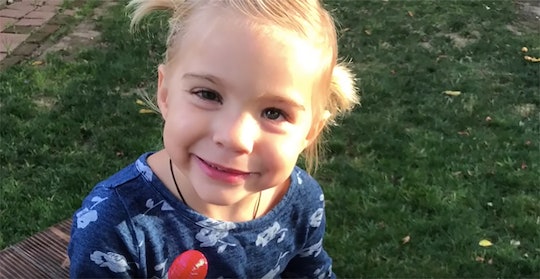 Being a parent with an attention for detail can pay off in life-changing ways, a sentiment this mom who helped detect her daughter's rare eye cancer can probably appreciate. The mom in question, Elly Smith, realized something was wrong with her then 2-year-old daughter after spotting a key difference in photos of the little girl, according to Metro.

With the rise of social media, some parents are taking more photos of their kids than ever. Smith was no exception to this phenomenon, and she took plenty of photos of her daughter, Gracie, in May 2016, according to Metro. These seemingly innocuous photos ultimately saved Gracie's life due to something Smith couldn't help but notice — one of her daughter's eyes was "glowing" in each shot, according to The Mirror.

"I knew something was wrong with Gracie because her eye would be glowing, and it looked like she had a lazy eye," she said, according to The Mirror.

After noticing the curious glow, a concerned Smith took Gracie to the doctor the following day.

"I made her an appointment the day I noticed it and her doctor referred us to an eye doctor," Smith recalled, according to the Daily Mail. "I could tell something was wrong there and noticed the doctor's chest getting red – I was just asking what was wrong."

Unfortunately, Gracie was diagnosed with the rare cancer retinoblastoma, according to the Daily Mail.

Gracie had 10 tumors in her eye, so doctors decided to operate right away.

"When we found out we tried to explain as best we could to a two-year-old and said her eye had an 'owee' and that the doctor had to take it out," Smith said, according to SurvivorNet.

Gracie's eye was surgically removed on June 1, 2016, "days after her mother noticed the white flash in her eye," according to The Mirror.

The procedure was followed by chemotherapy, which wasn't easy on Gracie, but she persevered in the end.

Gracie, who is a healthy 5-year-old today, received a prosthetic eye after the surgery, according to The Mirror.

"When they make the eye you get to choose something to put on the top so you know which is the top of the eye - Gracie chose a horse," Smith revealed, according to The Epoch Times.

Smith also noted how tough has been throughout the entire ordeal, explaining, according to The Epoch Times: “Gracie was fine with it. She is so resilient. She even has taken her spare eye in for show and tell. She has such an amazing spirit – she helped our family get through this."

Gracie's story is an important one, especially for parents who are concerned about retinoblastoma, which mostly affects young children, according to Kid's Health. In addition to the "glowing" eye (look for a white color in the center of the eye) Smith mentioned, parents should look for the following symptoms, according to Mayo Clinic:

If you have any concerns about your own child, don't hesitate to reach out to a doctor. As Smith learned, following up on a hunch can end up saving a life.

More Like This
New Report Shows 80% Of Pregnancy-Related Deaths Are Preventable
How Much Hair Loss Is Normal? 9 Signs You’re Losing Too Much Hair
The Difference Between The PICU & The NICU
What Does Amniotic Fluid Smell Like? A Nurse Explains