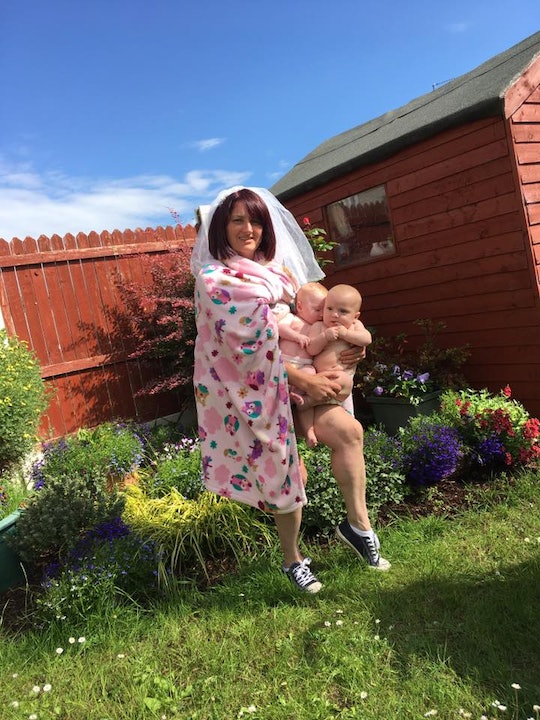 This Mom's Spoof Of Beyonce's Baby Reveal Photo Is Epic

There’s no doubt about it: We all strive to be like Beyoncé. And when she almost broke the internet ― again ― earlier this week after she officially announced the arrival of her and JAY-Z’s now 1-month-old twins, fans had one more reason to live up to all that is Queen Bey. But probably one of the most creative and funniest attempts to do so ― and just poke fun at a glamorous lifestyle most people simply don’t have ― is this mom’s hilarious recreation of Beyoncé’s baby photo reveal and the photos are just too good.

Sharon Kellaway ― a mother of five from Ireland, who gave birth to her own set of twins, Senan and Zoe, in February ― told the Irish news site Independent.ie that she "was amused by how unrealistic the images were in comparison to her own life with twins" and decided to have a little fun Beyoncé’s latest glamour shots.

"I just wanted to take the mickey as she looked so unrealistic," Kellaway told Independent.ie.

In Beyoncé’s Instagram post, the 35-year-old pop star is wearing a floor-length sheer turquoise veil along with a floral cape as she cradled her adorable newborns. “Sir Carter and Rumi 1 month today,” she captioned the jaw-dropping shot.

You’d think it’d be almost impossible to recreate Beyoncé’s photo, but Kellaway did a pretty good job and gave a lot of fellow moms a chuckle.

In her photo shoot, Kellaway went to her backyard and tied a patterned pink fleece blanket around her shoulders and put on a makeshift veil while holding up her diaper-clad tots. And the best part: Her 6-year-old daughter, Megan, took the photos ― proving yet again how resourceful moms are at just about anything.

"I wonder how many photos Beyoncé had to get through to get the right one,” she wrote on Facebook. "My 6 year old took the photos... no qualifications and still did a mighty job."

According to the DailyEdge.ie, Kellaway ― who has two other children, a 7-year-old and a 9-year-old ― said she had only done the photo shoot for fun and had no idea how much attention it would get.

"[I] didn’t think it would go viral, 30-40 likes on Facebook maybe but I never expected this… I woke up to a string of messages from newspapers and reporters," she told the DailyEdge.ie.

"Beyoncé will never really know what it’s like to have twins 24/7! Her life is the photo she put up all glam and photoshopped," she told the DailyEdge.ie. "The reality is €6 runners from Penneys and unshaven legs!"

While Beyoncé's life is undoubtedly much different than that of most moms, there's no harm in trying to have a little fun with her lifestyle. And Kellaway's spoof was just the dose of inspiration ― and laughter ― we needed.