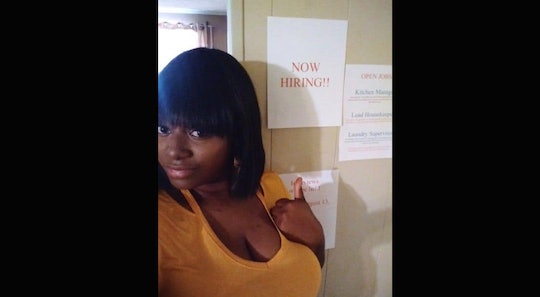 When This Mom's Kids Asked For An Allowance, She Held An At-Home "Job Fair" Instead

Some parents go to great lengths to teach their kids about the importance of hard work, like this mom who held a job fair for her kids after they asked for an allowance. Not only is the mom's idea genius, but it proves there are fun and inventive ways out there to teach children about the value of a dollar.

Earlier this week, Georgia mom of three, Shaketha Marion McGregor, took to Facebook where she shared her genius idea for making her kids do their chores. But this wasn't your average chore chart. Instead of developing a chart or a way to track her three kids (13-year-old son Jahkeem, 10-year-old daughter, Takeia, and 6-year-old daughter, Serinity) and their roles around the house, McGregor made her kids apply for specific jobs in the home and interview with her in person to get the role.

"So my children continue to ask for a new cell phone, an allowance, and to go places," McGregor wrote in the post on Facebook. "Yesterday I told them that I heard their requests and that I'll have a surprise for them today when they get home from school. Surprise!! It's a whole hiring event. If you want it, work for it, earn it!!"

Instead of volunteering to do the laundry, load up the dishwasher or vacuum, her kids applied for various roles. Available jobs included Laundry Supervisor, Kitchen Manager, and Lead Housekeeper, to name a few examples.

Once her kids found the perfect title for them, McGregor made them apply for the role with their availability, work experience, and their desired pay rate. McGregor tells Romper via email her kids were "slightly disappointed" when they saw that she was "hiring" but later "became excited to learn that they could work" for what they wanted.

Unfortunately, however, her kids couldn't even make it through the hiring process. In a follow up Facebook post, McGregor hilarious shared that her son was laughing throughout his entire interview and her 10-year-old daughter "started speaking in a British accent" to "help her" get hired. But despite the initial setbacks, there has been some success with the experiment.

"Serinity has already been abusing her authority. Lol She thought her job was to boss her siblings around and make them clean the rooms that's assigned to her," McGregor tells Romper. "Now that she's fully learned that she has to clean too, she wants to switch jobs and apply for the kitchen manager."

She continued, "My 10-year-old Takeia has been doing a fantastic job with her job! I'm very pleased with her work performance. She may even get a bonus. She's doing very well."

As for her son Jahkeem, she explains: "And my son Jahkeem has been helping both girls. I guess it's his way to show me that he can actually work so we'll see how that works out."

McGregor told TODAY that she was inspired to hold job interviews for her kids after she saw a "fire" in them for money management. "I started to think of ways I could teach them about credit and how to budget their time," she said.

And McGregor tells Romper she hopes her children will learn about the value of hard work, stating, "I wanted my children to understand that there's nothing wrong with a little hard work. We had been through so much over the past 3 years with me having cancer and us being homeless twice."

She continues, "The 2nd homeless incident occurred just last year because we had a house fire. Now that we are still recovering from that I was starting to stress myself out because I couldn't get them the things they wanted. I decided to take that weight off of my shoulders. I told them it is my job to make sure they have everything they NEED. But their WANTS are their responsibility to earn now."

Talk about an awesome mama, right?

Facebook users think this is a brilliant idea. Interview skills are so important to have, and giving kids the opportunity to do this early on is an exercise they won't forget. Her exercise teaches her kids that there are steps to earning and saving money, which is a valuable lesson to learn early on. Other moms seem to think this, too. Just five days after McGregor created the post, it has amassed more than 200,000 reactions, and 28,000 comments as of Sunday.

"Love this!" one commenter wrote. "You go girl!"

"Very cool!" another commenter added. "Must remember to do this when my kids are a little older! Bravo mom!"

"I am totally stealing this idea!" another mom stated. "This is the best thing I've ever heard."

Giving kids allowances has been a hot topic of discussion recently, according to Forbes. Some parents believe that it will teach them about money management while others disagree with "paying" their own kids. But allowances are super personal — they vary from family to family. No matter your views on allowances, money management is something worth teaching kids about, according to Scholastic. And McGregor agrees with this sentiment, telling Romper: "I want parents to see that education first starts at home and it can be fun for the entire family."

She continues, "I want them to learn new ways to help their children be successful in the classroom, at home and in the real world."

If anything, McGregor hopes that this post brought some joy to parents. telling USA Today that "education of any kind starts at home and doesn't have to be boring." And maybe this is just my opinion, but her hiring process seems anything but boring.