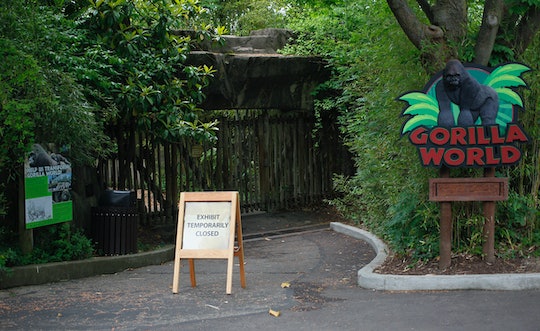 The mother of the young boy who entered the gorilla exhibit at the Cincinnati Zoo about two weeks ago, resulting in the death of a 17-year-old ape inside, won't be charged for the incident, an Ohio prosecutor announced Monday, according to ABC News. On May 28, the boy (his age has been reported as both 3 and 4 years old), made it past "Gorilla World" barriers and dropped between 10 and 12 feet into the enclosure. Harambe, a western lowland gorilla inside, dragged him around and stood over him in a manner that some say was protective. After 10 minutes, zoo officials made the call to shoot and kill him with a rifle to protect the child, and they maintain that the gorilla's size and strength posed an immediate threat.

The boy was mostly unharmed. The incident nevertheless exploded as people all over the country began to place blame for the death of the endangered gorilla, aiming vitriol at the zoo and the boy's mother, Michelle Gregg, who was with him at the time. The loudest voices, though, were the ones arguing that Gregg should be charged for her perceived negligence while visiting the zoo with her kids, with online petitions even garnering thousands of signatures.

"This mother did not act in any way where she presented this child to some harm," Deters said when announcing his office's decision not to pursue charges, according to CNN, adding that Gregg had three other kids with her at the time. "... I've gotten dozens if not hundreds of emails about this case, and if anyone doesn't believe that a 3-year-old can scamper off very quickly, they've never had kids, because they can, and they do."

Child service workers were impressed with the boy's environment when they visited the home, ABC News reported, effectively squashing the wild internet yelling that Gregg is unfit to parent, etc.

The zoo, meanwhile, will face a review by the U.S. Department of Agriculture to evaluates its possible responsibility for the incident, although its Gorilla World barrier at the time of the incident did adhere to strict safety guidelines and passed inspections by the Association of Zoos and Aquariums. Regardless, when the exhibit reopens Tuesday it will have a fence that's 42 inches high, which is a full six inches higher than before. It will feature solid wood beams at both the top and the bottom, just as the one at the zoo's lion exhibit does.

Harambe's death is undoubtedly a tragedy, but placing all the blame on the child's mother is shortsighted. In a post aptly titled "Remember that time you were a perfect parent every minute?" Washington Post columnist Amy Joyce derided social media commenters for vilifying Gregg, when, in reality, all parents make mistakes. "They judge, they type up their anonymous thoughts, they demand that this horrified mother be sued, arrested, visited upon by CPS," she wrote. "Forget that their mistake might be the next one that everyone loves to hate."

And it's true. Social media allows people with very little firsthand knowledge about a situation to spout off uninformed opinions, forgetting that, had their mistakes happened in a high-profile way in the public eye, they would be similarly condemned. The Cincinnati Zoo incident shows that, while perhaps both the zoo and the boy's parents could have acted differently, lambasting another person for parenting mistakes on social media is not at all productive or warranted.