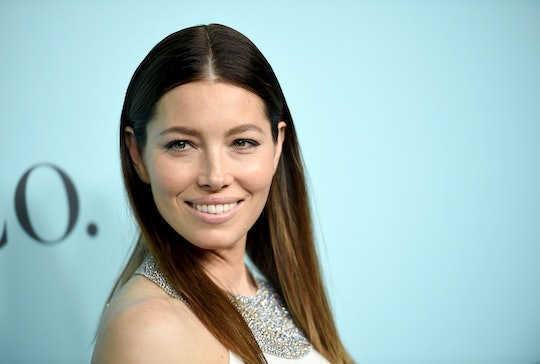 There aren't many sweet, sweet luxuries in the life of a mom, but a hot shower is definitely one of them. So is a good breakfast and a proper cup of coffee. Jessica Biel knows this. Because thanks to an Instagram post, we now know that mom Jessica Biel eats in the shower and has no shame about it. On Saturday, Biel posted a picture to Instagram of an empty plate in a gorgeously tiled shower (oh, the lifestyles of the rich and famous) with the caption, "Yes. I eat in the shower. I admit it. Chicken apple sausage and espresso. Try it. I dare you. #ShowerEats."

Not only is is she eating in the shower, she's enjoying those #ShowerEats in straight up style. I mean, do you even know what chicken apple sausage is? I do not, but when I get some, I'm bringing into my shower and eating it. It won't be as glorious as hers, because she probably got her husband Justin Timberlake to bring it to her, but I figure if you cue up "Sexy Back" and eat sausage in the shower, it probably has the same effect. These are things we laymen have to tell ourselves. Move over Gwyneth Paltrow, there's a new lifestyle guru in town and she gets it.

Biel has a son, 1-year-old Silas, so it's also entirely possible that she just wanted some peace and quiet for a minute (or wasn't going to have time in between her shower and whatever else was on the agenda this weekend to scarf down the most important meal of the day). Biel loves being a mom, though, even if it means downing espresso on-the-go (or under her rain shower). In August, she told InStyle that there are a lot of good things about being a mom, but the best is watching her son learn new things. She said "the discoveries they have on a daily basis" is her favorite part of being a mom. "The first time they notice the stars, and then the first time they notice that you turn the faucet and the water comes on and it’s like, the greatest thing that’s ever happened," she added.

Biel also told the magazine that being a new mom is crazy insane and requires a lot of sacrifice, but that it's important to remember that there's always "help around the corner." "People want to be helpful, so rely on your community of women, because it really does take a village and it really does make a difference when you have a group of women that you can go to," she said.

And if that means having someone fry you up some sausage for mid-shower, so be it.