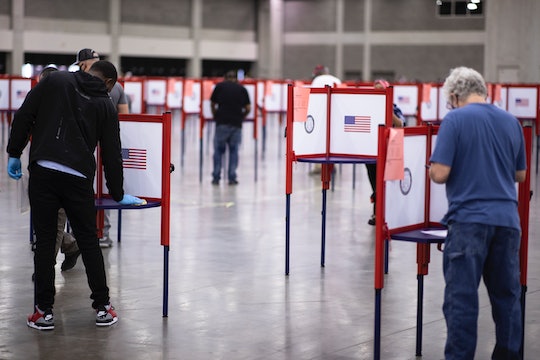 Dozens of voters in Kentucky's Jefferson County were almost barred from voting in the state's primary election on Tuesday after heavy traffic leading into the area's sole polling place prevented them from getting inside the building before the 6 p.m. deadline. After more than 20 minutes of confusion and outrage, polls in Jefferson County were momentarily reopened. But the chaos left the mother of a first-time Kentucky voter frustrated over how hard it had been for her daughter to exercise her right to vote.

"We shouldn’t have to go through all this," the woman, who did not identify herself, told a Courier-Journal reporter in an emotional interview after finally being allowed in to the Kentucky Exposition Center to vote. "I got a daughter right here. She’s 18 years old. This is her first time voting. She didn't have a graduation. She didn't have no prom. Our children are the future and they shouldn't have to go through all this stuff that we're going through."

"We're not supposed to go through all this stuff," the woman's daughter added in agreement.

"We should all be equal as one," the mother continued. "We're all brothers and sisters in God's eyes and we shouldn't have to go through all this. I'm scared for myself, I'm scared for my kids, my nephew, my sister, everybody."

She urged people to work together and have faith. "We need justice, we need peace," she said. "We all need to come together. We should love one another."

The number of polling places in Kentucky was slashed from 3,700 to just 170 ahead of the state's primary election, prompting concerns about voter suppression, CNN reported. In Jefferson County, the state's most populated county, voters were assigned one polling place — The Kentucky Exposition Center.

State election officials pushed back against claims that Kentucky's severely reduced number of polling places is an attempt at voter suppression, telling WFPL they had expanded mail-in voting to all eligible voters and reduced physical polling locations as a means to mitigate potential exposure to the novel coronavirus. The office for Kentucky's Secretary of State told WFPL that roughly 25% of registered voters had requested mail-in ballots for the primary.

In Louisville, heavy traffic leading in to the Expo Center's parking lot prevented dozens of voters from being able to access the building before polls closed at 6 p.m. With 15 minutes to go before polls were set to close, Democratic Senate candidate Charles Booker announced he was filing an injunction to keep polls open due to concerns about traffic in the parking lot. "The wait line to get in the parking lot is a half hour or more," Booker's spokesperson told The Courier-Journal.

While this mother and her 18-year-old daughter were eventually allowed in to vote, additional injunctions filed by both Booker and fellow Democratic Senate candidate Amy McGrath to keep polls open until 9 p.m. were both denied, according to WKYT.