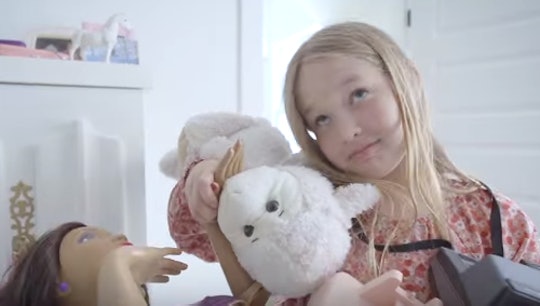 What better way to motivate your family to be cleaner around the house than to make a parody to a Justin Bieber song? Well, that was the line of thinking for the Holderness family, who are at it again with another parody music video that may hit the nail on the head for many families with kiddos in the house. In the video covering one of Bieber's recent hits, the mom parodies Bieber's "Love Yourself" and tells family to "clean yourself" instead. Because let's face it, everyday parenting can get a bit messy sometimes.

Interestingly, throughout the video — which pokes fun at kids and their untidiness, like toothpaste on mirrors or old bananas in lunch boxes – Penn Holderness, the dad, realizes that he is also guilty of contributing to the mess that his wife, Kim, complains about.

"Yeah the kids are slobs, I think we agree," Holderness sang. "But why is she now looking at me? Is it 'cause you find those nuggets of bread, from my nightly second dinner in bed? And I didn't know it made you mad, That I'm really good at making a 30-foot 3-pointer, but I miss the hamper."

Looks like the dad also has "some 'splaining to do" about his cleaning habits. And while enforcing gender norms that suggest moms bear the responsibility to clean the house is not OK, the Holderness family seems to have approached their cleaning struggles in a fun, light-hearted way, acknowledging they have work to do.

Later in the video, Penn confessed that he sometimes contributes to their kids' mess by putting his shoes on the kitchen counter, and leaving chicken bones out.

But, rightfully so, he acknowledges, "maybe I should clean it up myself." In an interview with TODAY, Penn said that there is some truth to the "Clean Yourself" parody.

Kim does most of the cleaning. I do OK with the dishes and the kitchen sink because they're not on the floor.

The dad attributed his qualms with the floor, or anything on it, to being 6-foot-five. As for the kiddos, Penn also told TODAY that it's often a struggle to get their kids to be tidy — a struggle that a lot of parents know all too well.

And while Penn did mention a couple of ways he and Kim could be stricter when it comes to enforcing cleaning rules with the kids, he explained that this fun video was also a "fight song," according to TODAY:

Cleaning a house for an hour then seeing my kids trash the place within fifteen seconds of getting home from school is cringeworthy and unacceptable, but it does happen. I know it's largely our fault because we allow it to happen, and we usually cave and pick up after them. That's why we wrote this song. This is our fight song...