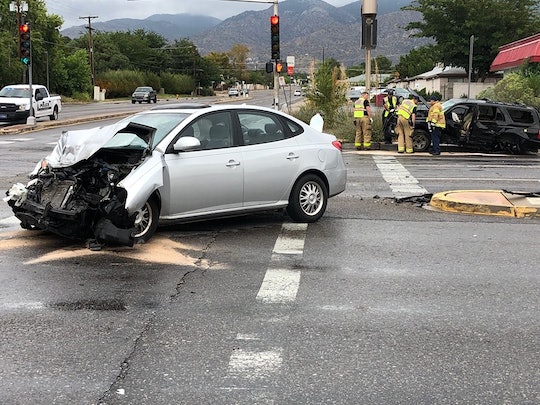 In the aftermath of an alarming car accident, one mom is raising awareness about booster seat safety after the product her son long fought against using ended up saving his life. Jen McLellan tells Romper she hopes other parents will become sticklers about booster seats after hearing — and seeing — how a booster seat helped her 9-year-old son walk away from a major crash with minor injuries.

"You just never think these things will happen in general let alone so close to your home," McLellan, founder of the Plus Size Birth and Plus Mommy blogs, tells Romper of the car accident her husband Chris and son Braeden were involved in when another vehicle ran through a red light less than a mile from their home in Albuquerque, New Mexico, on Sept. 15. "I wasn't expecting it to be as bad of an accident as it was," she says.

When McLellan arrived at the scene of the accident shortly after receiving a phone call from her husband, she found first responders treating her husband for injuries. "I couldn't see my son," she tells Romper. "I started to call out, 'where’s Braeden?' And then when I saw Braeden, he was covered in what looked to be — it was red."

Although visibly shaken and already showing scrapes from the seatbelt, Braeden was thankfully merely covered in a red drink that had spilled during the crash. In fact, McLellan says paramedics, emergency room personnel, and her son's pediatrician have all told her that Braeden likely would have suffered far more, or more serious injuries, had he not been using a booster seat. Even the placement of Braeden's minor injuries seem to be evidence of how his booster seat helped protect him in the crash.

"It's amazing, the bruising that happened to his body showed clearly that because he was in the booster seat the seat belt was in the correct position," McLellan, who is also the host of the Plus Mommy Podcast, tells Romper.

And although Braeden is now more than happy to use a booster seat (the McLellan family immediately ordered a replacement for him after the crash), McLellan says that wasn't always the case. Over the course of the last year, Braeden repeatedly argued about having to use it, often listing off the names of children he knew who weren't required to ride in one. "It's more of an embarrassment thing as they get older," McLellan tells Romper. "To me, it was a non-negotiable and it still is. His booster seat, it really saved him and I'm forever thankful that we never gave in over the past year of him trying to negotiate [out of it.]"

In an effort to raise awareness about the importance of continuing to use booster seats until a seatbelt properly fits, McLellan has shared her family's story, and a photograph of Braeden's injuries, on her social media. "The information that parents hear is always on height and weight, but there's more to it," McLellan tells Romper. "It's really about how the seatbelt is properly laying across the body."

While the the U.S. Department of Transportation gauges that children should ride in cars using a booster seat from around 4 to 12 years old, the agency notes that the best determination of when a booster seat is not needed is the seatbelt. "Keep your child in a booster seat until he or she is big enough to fit in a seat belt properly," the Department of Transportation website reads. "For a seat belt to fit properly the lap belt must lie snugly across the upper thighs, not the stomach. The shoulder belt should lie snugly across the shoulder and chest and not cross the neck or face."

McLellan's post has since gone viral, drawing attention from thousands of parents, and she says she's glad to see something good come from her family's experience. "I never expected it to go viral but it's been a very emotional and incredible the amount of people who have privately messaged me or publicly said, 'I'm putting my kid in a booster chair now' or 'my kid has been fighting me to get out of it and I'm not going to budge now either," she tells Romper. "To know that that has been an outcome, doesn’t make it worth what my family has gone through but it means that something good has come of it and that just touches my whole family’s heart so much."

Now, the family is focused on healing. Although Chris, McLellan's husband, has a longer road to recovery ahead of him (the family has a GoFundMe as his injuries have prevented him from returning to work), she says Braeden is already on the mend. "He has some PTSD but overall, physically, he's really healing well," she tells Romper. "I can't even wrap my head around how it could have been so much worse. ... All kids my son’s age should be in a booster."

More Like This
Over 10,000 Sippy Cups & Bottles For Toddlers Recalled Due To Lead Poisoning Hazard
Viral Reddit Post Asks If A Toddler Can Watch Cartoons Without Headphones On A Plane
Kim Kardashian Says She's "Shaken" By Balenciaga's Ad Campaign Featuring Children
"Corn Kid" Handed Out Over 40,000 Cans Of Corn At A Food Bank Ahead Of Thanksgiving