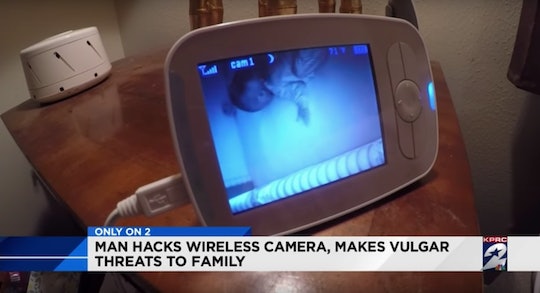 Many parents use Wi-Fi connected devices to help keep an eye on their young kids because they are easy to use. But these type of products can be susceptible to privacy breaches, a scary situation that a Texas-based mom says she experienced this week. As KPRC-TV reported, the mom claims her baby monitor was hacked by a person who threatened to kidnap her 4-month-old son.

Ellen Rigney and her husband, Nathan, were at their Houston, Texas home Monday night when they said they noticed a strange sound coming from the Nest camera connected to their infant son Topper's bedroom around 12 a.m. CT, as KPRC-TV reported. Rigney's confusion then turned to terror as she claims she heard "sexual expletives being said" in Topper's room, according to NBC News.

Rigney and her husband, who were in bed at the time, then flicked on their bedroom light in a panic, as they told the news outlet. That's when they say another Nest camera in their room suddenly turned on, reportedly with an unidentified man's voice coming through telling them to turn the light off, according to KXAS-TV.

"Then [he] said 'I’m going to kidnap your baby, I’m in your baby’s room,'" Rigney recalled, as KPRC-TV reported.

As Rigney told the news outlet, Nathan immediately ran to Topper's bedroom, where he thankfully discovered that his 4-month-old was completely fine.

Once Rigney figured out was going on, she shut down her Wi-Fi ASAP. “We just had to figure out how to get (the Wi-Fi) shut down, and shut down fast!” Rigney explained, as KPRC-TV reported. “I kept telling [Nathan], he’s not in here, somebody’s hacking this!”

A Nest spokesperson tells Romper in an email:

At Nest, we care deeply about security. As part of our ongoing investment in helping users keep more secure passwords, we have seen instances where customers reused passwords that were previously exposed through breaches on other websites and published publicly. None of these breaches involved Nest. Reusing compromised passwords can expose customers to other people using the credentials to log into their Nest account and potentially other websites and services. After alerting affected customers to reset their passwords and set up two-factor authentication, we reset their accounts to prevent unauthorized access.

Two-Factor authentication is "a security process in which the user provides two different authentication factors to verify themselves to better protect both the user's credentials and the resources the user can access," according to SearchSecurity.

If you have a Nest camera, you can visit the company's website where you can find detailed instructions about how to set up two-factor authentication for your device.

As for Rigney, she says she's done with Wi-Fi connected devices for now and is instead using a regular camera to watch over Topper. "It’s unnerving and unsettling,” Rigney said about the situation, according to NBC News. "You have something that’s supposed to make you feel better, and instead it makes you feel the opposite."

No parent should ever have to go through the terror of thinking their child is in harm's way, especially in the comfort of their home. To avoid a situation like Rigney's, consult with a cybersecurity expert or brush up on best practices for internet security. One idea is to make sure your internet router is configured to use WPA2-based encryption, an integral step in keeping things "secure between the cameras and your router," according to Make Use Of.

Although you can never fully eliminate the risks associated with the internet, parents can remain vigilant and knowledgeable in these types of situations and inform themselves on ways to ensure their devices are protected.