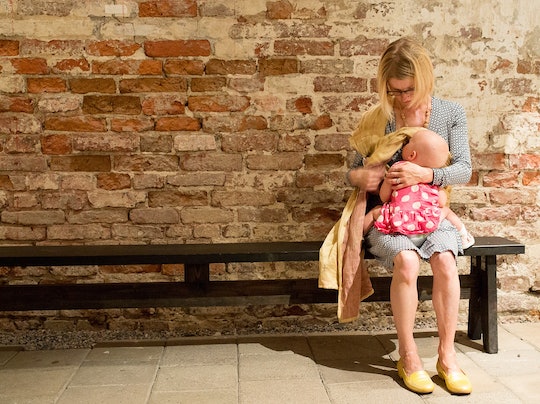 As any nursing mom can tell you, breastfeeding in public is no easy task. First of all, the actual act of breastfeeding itself can be its own challenge — but trying to negotiate both boob and baby while in a public setting takes that up a whole 'nother level. That's why a Facebook post that's gone viral is so disturbing: A Colorado mom claimed she was shamed by a cop after she was harassed while breastfeeding at her local IHOP. There are a lot of moving parts to this story, so let's break it down piece by piece.

On Tuesday, mom Tiara Wilson wrote a post on her Facebook account about a truly awful experience at her local Aurora, Colorado, IHOP. Wilson's post was shared on the Breastfeeding Mama Talk Facebook page, where it quickly went viral. According to Wilson, she had gone to the pancake restaurant with a group of mom friends, where three of them began breastfeeding their babies at the table. Another family was then seated at the table next to their group, and that's when Wilson said things got super uncomfortable:

While breastfeeding that same family of 3 that was sitting next to us, decided to snap a picture of us feeding our babies. He decided to make disgusting faces and snarky little remarks to his family. Then his family decided to take photos and decided that they would sit there the whole time and mean mug and again make nasty faces as everyone FED their babies.

Wilson did not immediately respond to Romper's request for comment.

According to Wilson, a woman in her group spoke to the manager at the IHOP, who decided to call the police. This is important — IHOP was not in the wrong here: The manager reportedly called the police in an effort to protect and support the group of nursing mothers. When two officers of the Aurora Police Department arrived, Wilson alleged they were less than supportive. Instead of addressing the people harassing the moms, Wilson claimed the police officers shamed the nursing mothers instead:

The police came and this part is what TRULY disgusted me. The police said: "GO TO THE BATHROOM or USE A COVER" if you don't want to be bothered or have pictures snapped while feeding. This caused one of my mama friends to break down in tears because this horrible family is snapping pictures of her exposed breast and that was their response.

Now, before you head to the Aurora PD Facebook page as many, many angry moms have — there have been updates since Wilson's post Tuesday. In a comment by the Aurora Police Department on Facebook, the agency stated it reached out to Wilson and is investigating the incident, specifically "to determine exactly what happened and why our officer responded the way he did." It also responded to other outraged comments on its own Facebook page, saying no further statement will be made while the investigation is currently ongoing. The Aurora Police Department declined Romper's request for additional comment and directed people to its Facebook page comment.

A few other important points, as Wilson was quick to point both of these facts out in a follow up post about the IHOP breastfeeding incident on her own Facebook page. First — breastfeeding in public is not illegal. In fact, it's protected by law. Likewise, as Wilson pointed out in her update, the people taking pictures of the minor children and their moms did not break any laws just by taking pictures of them in public.

But the bigger issue still stands: Telling a woman to feed her child in a bathroom is not OK. Telling her she needs to cover up while feeding her child is not OK. If you don't eat your dinner in the bathroom or wear a bag over your head while you do, then why on God's green earth do people still think this is OK to say to nursing mothers? For some reason, there are those who equate boobs with sex — and in some contexts, yes — that's a totally valid equivalency. But say it with me now: Breastfeeding is not a sexual act.

As for Wilson and her friends, there's no immediate recourse that can undo what happened to them Tuesday, but it appears as though the Aurora Police Department is taking the steps to do right by them — and breastfeeding mothers in general — as best it can.