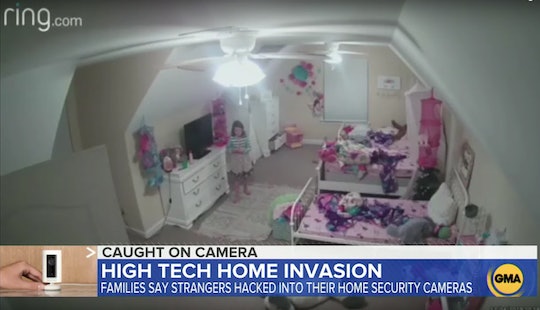 After a frightening experience involving a smart camera placed in her daughter's room, Ashley LeMay is trying to raise awareness about tech security. The Mississippi mom says a stranger was able to hack into the family's camera, a Ring video monitor, that looked into her 8-year-old's bedroom, and allegedly spoke to her daughter through the monitor, trying to convince her to destroy the room.

"I can't even put into words how violated I feel. It really is like my worst nightmare," the mom of four told ABC News. LeMay told People she had purchased the Ring camera during a Black Friday sale this year and a week later on Dec. 4, she said a male voice started talking to her daughter, Alyssa.

In video footage from the camera provided to ABC News, you can hear music playing and see Alyssa searching her room to investigate its source. "Who is that?" Alyssa asks. "I'm your best friend," the voice replies. "I'm Santa Claus." The voice continues to mess with the confused little girl, coaxing, "You could do whatever you want right now. You could mess up your room. You could break your TV."

At the end of the clip, Alyssa calls out for her mom. Although LeMay wasn't home at the time, her husband was home but in the garage when the incident happened. When he heard Alyssa calling, "Mommy!" he went into the room and determined the camera had been hacked.

A Ring spokesperson told Romper in a statement that the company "[takes] the security of our devices seriously," adding that the company's "security team has investigated this incident and we have no evidence of an unauthorized intrusion or compromise of Ring’s systems or network."

"Recently, we were made aware of an incident where malicious actors obtained some Ring users’ account credentials (e.g., username and password) from a separate, external, non-Ring service and reused them to log in to some Ring accounts," the statement continued. "Unfortunately, when the same username and password is reused on multiple services, it’s possible for bad actors to gain access to many accounts."

Ring says that "upon learning of the incident, [the company] took appropriate actions to promptly block bad actors from known affected Ring accounts and affected users have been contacted."

"Consumers should always practice good password hygiene and we encourage Ring customers to change their password and enable two-factor authentication," the statement concluded.

In an interview with People, LeMay insisted that her network was secure, however she admitted to WMC-TV that she hadn't set up the two-factor authentication for her Ring account. Now, she just wants other parents to be aware of what could happen.

"There’s many reasons why people have cameras in a child’s room," LeMay told People. "Mine being because my daughter has a history of seizures, that was the main reason I had it. Just realize it can happen to you. The whole point of all this is to bring awareness. It’s not to scare anybody, but to bring awareness."

If you happen to own a Ring Camera, setting up two-factor authentication offers an extra layer of security that only entering a password doesn't. With two-step authentication, you not only have to enter a password, you have to then enter a randomly-generated code that's sent to your phone in order to gain access to the camera. That way, if someone were to gain access to your password — as they likely did in LeMay's case — they wouldn't be able to access the camera without your phone to receive the code. It's an extra step, yes. But it can help avoid a startling situation.