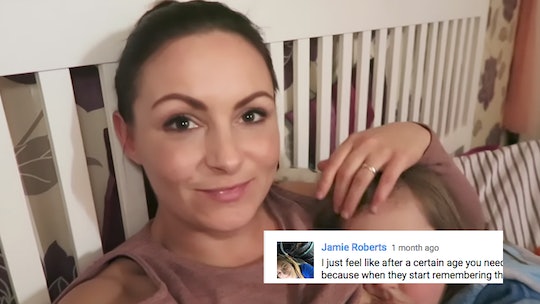 Leanne Allerton uses her YouTube videos to talk about her family and what they do in their everyday lives, and that happens to include her breastfeeding sessions with her kids. In particular, a recent video of Allerton breastfeeding her daughter, Poppy, has attracted a lot of attention, and unfortunately, it's not the good kind. This YouTube mom had to shut down her critics after being shamed for breastfeeding her 4-year-old in a video that has gone viral and now has almost one million views.

According to The Sun, Allerton shared footage of herself feeding her daughter in May on her family YouTube channel, and it's taken off again in early August. The video is around three minutes long, and for such a short clip featuring a pretty normal aspect of family life with small children, it's sure raised an uproar on the internet.

The problem people have with the video seemed to lie in the fact that Poppy is old enough that she will start school in September, according to The Huffington Post UK. As a result, a whole lot of strangers on the web think that Allerton is wrong for continuing to breastfeed her daughter.

But now Allerton is hitting back against the haters. According to Little Things, while many people commenting are actually supportive of Allerton, there have been plenty of nasty comments as well.

However, Allerton knows exactly how to deal with people who leave more negative views on her videos. She told The Daily Mail:

I post breastfeeding videos when I feel like talking about things because there will always be someone out there who is going through the same thing.

You get a lot of nice suggestions but also a lot of abuse — those I tend to block and delete.

Which is honestly probably the best way to deal with any trolls or truly mean people commenting on anything on the internet. We could probably all take a cue from Allerton when it comes to dealing with negative responses online.

And these aren't all just "well I don't agree with this" opinionated comments, either. Little Things reported that some of the comments on the video have called Leanne “sickening” or a “slut,” mostly because the commenters think Poppy is simply too old to breastfeed.

But how does breastfeeding a young child make a woman a slutty? And why would anyone call the act sickening? According to Dr. Lori Winter, of the American Academy of Pediatrics, it's literally not harming Poppy in any way for her mother to still be breastfeeding her. On a different story about how old is "too old" for a child to be breastfeeding, Winter told ABC News that when it comes to breastfeeding children for as long as they want, "It's completely appropriate that a mother should avail herself to her infant or toddler. That's in no way damaging to the child."

And that's all that Allerton did. Over at The Huffington Post UK, she defended her decision to keep breastfeeding her daughter long past when random people on the internet think she should have stopped. She told the website:

But I think being a mum is hard work whether you are breastfeeding or using formula milk. People say to me that Poppy relies on me too much but it is not about that.

It’s our time and it benefits her. It is just our routine and our life and it’s just the way it is.

And as long as doctors like Winter say it's fine, it's really not anyone else's call to say when Allerton "should" stop breastfeeding Poppy.

For now, Allerton will just have to keep those block and delete options at the ready, because if the latest comments on the YouTube video are any indication, she's still going to need to silence her critics for a little while.

More Like This
A Teen Was Body-Shamed By Matt Gaetz. She Raised Over $700,000 For Abortion Funds.
This Job Listing For A Nanny Has Gone Viral For Being Completely Unreasonable
Serena Williams Is Retiring From Tennis To “Focus On Being A Mom”
20 Photos Of Prince George & Kate Middleton Being The Best Of Friends