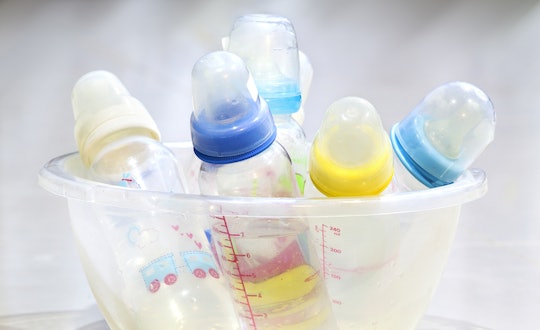 There's a certain amount of trust implicit in the relationship between child care providers and parents. Parents rely on their providers to look after the well-being of their children, but also to abide by the wishes of the parents. And when that trust is broken, relationships can be shattered. For instance, one mom sued her nanny for allegedly feeding her baby formula instead of breast milk, against her wishes to exclusively breastfeed her daughter.

Lynn Wojton is a New York City cosmetic nurse injector, mother, and breastfeeding proponent who hired a doula at the cost of $4,200 to serve as a nighttime baby nurse and watch her infant daughter, Wilder, according to The Cut. But after her nanny, Marcia Chase-Marshall, allegedly gave Wilder formula without Wojton's consent, the distraught mom has filed a lawsuit against her. According to the suit, the formula reportedly left the little girl “[crying] for an hour.” Romper reached out to Wojton for comment but has yet to hear back at the time of this publication.

According to Yahoo! Lifestyle, prior to giving birth to Wilder, Wojton told Chase-Marshall that “she wanted to rely on breastfeeding as her newborn’s sole source of nutrition because it was her belief it was best for the health of the baby and fostered bonding with her newborn.”

Wojton told The New York Post that she was "very upset" by the alleged incident, leading her to file a complaint in the Manhattan Supreme Court on March 7. Her complaint stated that while on duty as a night nurse, Chase-Marshall “initially claimed that she was recommending formula feeding the baby because she was concerned for the baby’s health,” but reportedly admitted later that “her true concern” was her own sleep schedule and the interruptions posed by breastfeeding.

Immediately following the night when Chase-Marshall allegedly gave the baby formula, Wojton reportedly told her that she “wanted to care for her newborn for a few days on her own,” as noted in the lawsuit. Almost immediately, according to Yahoo! Lifestyle, Chase-Marshall quit.

Unfortunately, the alleged formula incident wasn't the only cause of conflict between the new mom and her doula. Wojton told The Cut that the two had reportedly butted heads on just about everything, including changing diapers and bathing Wilder.

Your instincts do kick in. It was the last straw, the way she was behaving and the way she was speaking to me. If I didn’t change the diaper the way she thought was best, she would criticize me the whole time. It makes you second-guess yourself. You’re a new mother and this is all very new.

Wojton's lawyer Brett Gallaway sated that she was in a difficult position prior to filing the lawsuit, according to USA Today. “Lynn obviously didn’t want to cross a stranger who had direct access to her baby, to her home and belongings at such an important and potentially volatile time,” he said, as USA Today reported.

Fortunately, it sounds like both mother and baby are doing just fine now. Wojton, who owns and runs a cosmetic nursing practice, told The Cut that Wilder celebrated her 6-month birthday this month and is happily under the care of a new nanny. “I’m in a good place now, but I still get upset,” Wojton told the publication.

The lawsuit is still open and it has yet to be decided if Chase-Marshall will pay anything in damages. But one this is clear: it doesn't pay to mess with a mama.