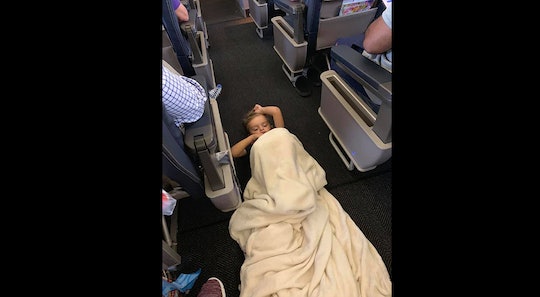 Being parent to a child with special needs poses its own set of hurdles that many of us wouldn't think twice about. Mom Lori Gabriel from Cypress, Texas learned this firsthand when she flew with her 4-year-old son with autism, Braysen, on a recent plane ride. But despite the difficulties, Gabriel left the plane feeling grateful as her son received a hefty helping of support and understanding throughout the trip. Now this mom is publicly thanking the flight crew and passengers for how they handled the situation, with the heartfelt note quickly going viral.

Braysen and his family were heading home from San Diego to Houston via a United Airlines flight when the little guy started to become frustrated. Although he loved the flight on the way there, this time it was just too long. "So my little flyer (he’s autistic but normally loves to fly) didn’t have such a good flight home," Gabriel explained on Facebook. "Trying to get him to stay seated was impossible he wanted to sit on the floor in the hall and in first class."

Of course, this situation could have quickly become stressful for Gabriel and her family. But luckily for Braysen, United Airlines went above and beyond to accommodate his needs. "Huge thank you to united airlines they accommodated his needs, made sure we were all OK, worked around where he choose to sit," she said.

And it wasn't just the flight attendants that came to their aid. The passengers showed a great deal of compassion, when the incident could have easily went south.

"To the lady that wrote me this note in seat 7D thank you, you may not know how much that means to us when we feel defeated," Gabriel captioned a shot of a handwritten note. "Thank you for helping and being kind just so happens she also works for United. To the man in first class seat 6C you rock thanks for playing with Braysen and not minding him kicking your seat or messing with you! He loved your high fives!" Aww.

And she made sure to thank the entire United crew for going above and beyond the call of duty.

"Hopefully they will see this you never know with social media how fast word can spread but y’all made our flight less stressful being so understanding! United really showed up tonight and helped us through this flight."

The airline followed up with Gabriel's story with a personalized tweet, writing: "It sure sounds like Braysen and your family had a great flight. We are happy that our crew was able to make it an enjoyable experience. We are overjoyed to see that we have such loving and supportive passengers on board as well! We look forward to seeing Braysen again soon!"

Bravo to United for stepping it up and being inclusive of all passengers.

For Gabriel, this is the first time she believes her son has felt seen.

"For the first time, people have been very understanding and helpful about Braysen's autism," she said, according to CNN. "It's very promising, we don't have to care about what other people think because there are people who are caring, who understand. It gives me a lot of hope for the future."

The response to her story has been immediate and abundant, with many applauding Gabriel for keeping her cool and addressing the situation with patience.

One commenter said, "Beautiful, my nephew is autistic and I see the dirty looks given by people who don't understand, you people are rock stars for your kindness and compassion!"

And it certainly hit a note with parents of other special needs children, with one person stating, "Thank you for sharing this. My son is also autistic and I know my nerves would've been shot before the flight. You never know which mood you'll get. To know that there are good hearted people in this world is really heart warming. You're a rockstar, mom. Always know that. Have a blessed day."

With so many news stories about airlines doing poorly, it's refreshing to see them doing some good! Gabriel and her family will most likely remember this experience for the rest of their lives, and hopefully, little Braysen will continue to receive the same respect and understanding that his peers do.