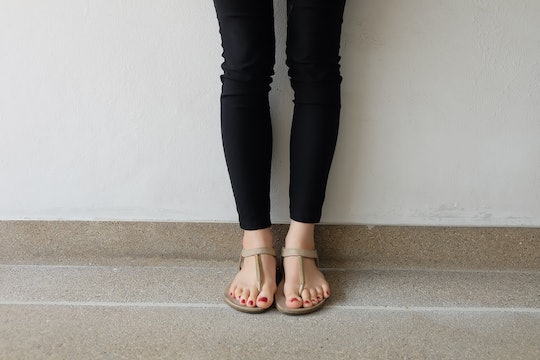 In a world that is already so stringent about the way it polices women's bodies, behaviors, appearances, and sartorial choices, it's unfortunate to read that sometimes, the greatest enemy is a fellow woman. Such is the case with a mom who thinks women at Notre Dame shouldn't wear leggings, a concept to which students responded perfectly.

In an op-ed published by the college's newspaper, The Observer, a mother of one of the male students at Notre Dame wrote to express her concern about, well, women wearing leggings, as The Hill reported. Her issue, as she explained in the op-ed, seems to be primarily that leggings apparently infer nakedness, that they signal that the women who wear them do not have adequate respect for themselves, and the cherry on top of it all: that men simply cannot resist looking at you in a certain way when you wear them, which is inferred to be amoral and disrespectful.

"I’ve thought about writing this letter for a long time," the op-ed begins. "I waited, hoping that fashions would change and such a letter would be unnecessary — but that doesn’t seem to be happening. I’m not trying to insult anyone or infringe upon anyone’s rights. I’m just a Catholic mother of four sons with a problem that only girls can solve: leggings."

The entire letter has deeply religious overtones (she mentions multiple times that her perspective comes from her background as a Catholic) but it's equally patronizing as well: she, at one point, says she wants to "lovingly blanket" young women to protect them, while at the same time, wrap a scarf around young men's eyes, too.

The mother goes on to say that she tried to teach her son about the amorality of having your body seen as a means to an end, referencing pop culture characters like "Princess Leia" (referred to as, and I couldn't make this up, a "slave girl"). She continues:

I’ve heard women say that they like leggings because they’re “comfortable.” So are pajamas. So is nakedness. And the human body is a beautiful thing. But we don’t go around naked because we respect ourselves — we want to be seen as a person, not a body (like slave-girl Leia). We don’t go naked because we respect the other people who must see us, whether they would or not. These are not just my sons — they’re the fathers and brothers of your friends, the male students in your classes, the men of every variety who visit campus. I’m fretting both because of unsavory guys who are looking at you creepily and nice guys who are doing everything to avoid looking at you. For the Catholic mothers who want to find a blanket to lovingly cover your nakedness and protect you — and to find scarves to tie over the eyes of their sons to protect them from you!

Of course, it probably goes without saying that the response was... exactly what you'd expect. According to The Washington Post, female students at Notre Dame protested the letter by hosting an event in which women would wear only leggings.

It was, needless to say, an overwhelming success and has thus far generated national headlines.

And many more people took to Twitter to share thoughts on the op-ed. "So leggings make it harder for people to 'teach their sons that women are someone’s daughters and sisters' and should be treated with respect. Let's try this again: women, no matter what they wear, are people and should be treated with respect. That's it," one user responded on Twitter.

"If she’s raising her sons with the values she claims to hold dear, then I assume she taught her boys not to remove their shirts at the beach or pool," said another.

Another wrote, "I'm the mother of three sons. Leggings, or any other female clothing, are not an issue for them, because we taught them to respect women, and way before they left for college."

Of course, the op-ed did end with the mother saying that she is aware that while women do have the choice to wear them or not, she hopes they'll reconsider.

Perhaps she forgot to leave out that women also have the right to choose to listen or not to listen to archaic advice that unnecessarily polices something as innocuous as a pair of stretchy, black pants. There's no such disdain directed toward men wearing spandex for sports, which proves even further this whole conversation is not a matter of principle, it's a matter of policing.

More Like This
Here’s How To Fight For Abortion Rights
Obamas Issue Powerful Statements After Supreme Court Ends Roe v. Wade
Keep Talking To Your Kids About Abortion — It's More Important Than Ever
AAP Now Recommends Mothers Breastfeed For 2 Years Or More In New Guidelines