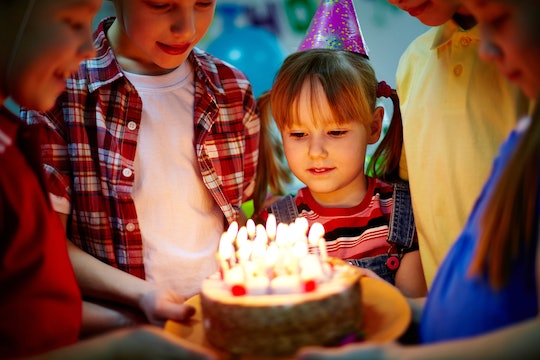 The topic of vaccinations is one of the hot-button parenting issues of our generation. On one side, there's the concern of personal and public health — added to the fact that vaccines have been proven to be both safe and effective in preventing the spread of disease. On the other side, though, is the thought that parents should be able to have some level of control over what goes into their child's body. But at what price? Well, apparently, one mom un-invited a child to her daughter's birthday party after learning she was unvaccinated. Romper has reached out to the Reddit user, but did not immediately hear back.

Recently, a Reddit user asked a group of medical professionals to share their worst experiences with anti-vaxxers. As Scary Mommy reported, a physician's assistant and mom of a 7-year-old daughter offered up her run-in with an anti-vaxx parent. According to the Daily Mail, the unnamed 35-year-old mom from North Carolina explained that she had sent out invitations to her daughter's birthday party, only to find out that one of her daughter's dance friends was unvaccinated. The thing was, her daughter's best friend is in remission from leukemia and is immunocompromised — meaning being in close proximity with an unvaccinated kid could literally kill her.

"I uninvited the dance kid and very nicely explained the situation. Her mother loses her sh*t and tries to get us kicked out of the dance school they attend," the mom wrote on Reddit. "The dance school owner is an older lady and had no idea there were idiots these days that didn’t vax so she implemented a new rule that students had to be up to date and the unvaxxed kid had to find a new dance school." She continued:

I felt bad for the kid but her mother is a sociopath. Herd immunity saves lives when it comes to kids fighting cancer.

According to the American Academy of Pediatrics (AAP), the idea behind herd immunity is that when a sufficient percentage of a given community is immune to a particular condition, they protect those who don't have that immunity. Certain at-risk populations depend on herd immunity. You know, like cancer survivors, infants and young children, the elderly, the immunocompromised, and those who legitimately cannot receive certain vaccines because of allergies, etc. So parents who choose not to vaccinate their children are not only putting their own kids at risk, but also members of those other groups, who rely on herd immunity to avoid getting that disease.

Unsurprisingly, this Reddit user's story quickly went viral. One Redditor commented, "This is the thing about antivaxers that really drives me nuts, I feel terrible for their kids getting put at risk, but it's even worse than that, they are putting at risk anyone who is immune compromised! Elderly, sick, pregnant people, new born babies.... Its selfish and irresponsible."

A Twitter user wrote, "If a parent chooses to threaten public health & not vaccinate her child, she has to be prepared for the consequences."

I'm due with my fourth child in January — right in the middle of flu season. So you can bet your buns that my entire family got the flu shot as soon as it was available — including one set of grandparents. We're all up-to-date on our Tdap vaccines, too. (And I received both the flu shot and a Tdap — as recommended — while pregnant.) Recently, I even made a declaration via social media stating that anyone who plans on touching my newborn had to be up-to-date on their Tdap and had to have received a flu shot. And I'm not backing down on this one bit. Sorry, not sorry.

So kudos to this mom for standing her ground and keeping her daughter's cancer survivor friend away from an unvaccinated child. As crappy as it is for that unvaccinated child to have to miss out, it was most definitely the right call.