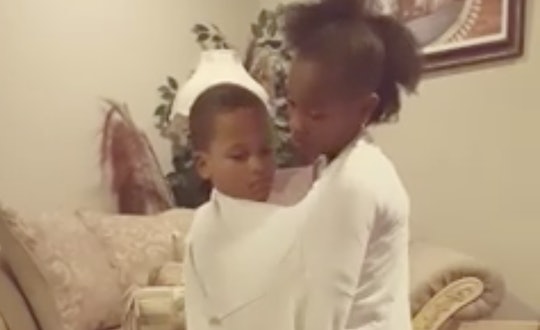 Mom's Solution To Ending Her Kids' Fights Is Genius

As a parent, it can be frustrating to listen to your children not just misbehave, but misbehave by fighting with their sibling. It's excruciating, but as most parents of two or more kids knows, inevitable. Fortunately, a Melville, Illinois mom had a creative solution to all the bickering: She put her kids in a giant "I Love You" shirt and made them dance together to shut them up. No joke. It's possibly the cutest thing you've seen in a while, especially because both children look absolutely miserable.

Alexis Tillman told CBS News that she's been using the t-shirt method for a little over a year with her children, 10-year-old Dominique and 8-year-old Tyler. In the video she posted on Facebook, you hear her threaten, "do you need me to get the shirt?" The shirt in question is an oversized shirt, dubbed "the I Love You shirt" in the Tillman household. The two children stop when they hear word of the garment.

They really don't like the shirt. But it's not good enough. Alexis takes the shirt and puts it over both of their heads, so they're as close as can possibly be. Alexis turns on "I’m Lost Without You” by BeBe and Cece Winans, an American gospel music brother and sister duo,.

The two have no choice but to sway with each other until their mom tells them they can stop.

“They sing gospel songs together. They are very, very close. That’s why I picked that song. I wanted them to hear the words they are saying. I said, ‘You’re brother and sister — you need each other,'" Tillman said. She's not wrong. The creative mother added:

I want them to get along, to stick together. So that’s what I’ll keep trying to teach them. Whatever it is that you’re arguing or bickering about it’s silly, let it go.

Usually it's just one song, Tillman said, but it depends on the situation and how "dramatic" the two are are being with each other. Then she'll make it two or three songs. One day, the two kids will have a good laugh at this, but for now, they're definitely scared of the shirt. Tillman has two other children, 12 and 16 years old, but hasn't had to whip out the tunes and the t-shirt for them yet.

Tillman said she knows the shirt is annoying. That's why it works so well. "It beat spanking or yelling at them," she concluded.