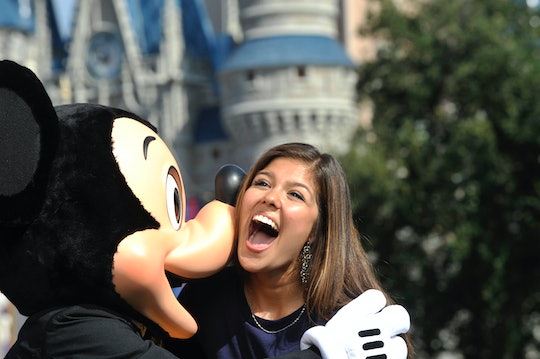 Disney World is known as one the happiest places on Earth for people of all ages — families and single folks alike — but one mom doesn't seem to agree with that sentiment. In a heated rant that's gone viral on social media, one mom said she wants Disney World to ban "childless millennials" and, understandably, the internet has all sorts of feelings about her rather extreme thoughts.

On July 19, as CBS News reported, Twitter user @JenKatWrites shared a screenshot of what looks like an old Facebook post with the user's name and photo redacted. "This is my new favorite wild mommy post. It’s me, the millennial sl*t who just goes to Disney World to make children cry," @JenKatWrites captioned the screenshot on Twitter.

The disgruntled mom's post began, "It p*sses me off TO NO END!!!!! when I see CHILDLESS COUPLES WITHOUT AT DISNEY WORLD!!!! DW is a FAMILY amusement park... yet these IMMATURE millennials THROW AWAY THEIR MONEY ON USELESS CR*P!!!!"

The mother went on to accuse childless visitors of causing longer lines, making things harder for adults with kids when they go. "This c*nt in some very SL*TTY shorts was buying a Mickey pretzel and Aiden wanted one but the line was very long so I said later and it broke his poor little heart and he cried,” the woman wrote. “I WANTED TO TAKE THAT F*CKING PRETZEL FROM THAT TRAMP LIKE THANKS B*TCH YOU MADE MY SON CRY!"

"YOU HAVE NO F*CKING IDEA WHAT ITS LIKE TO HAVE TO STAND IN LINE FOR 3 HOURS WITH A CRANKY TIRED EXHAUSTED TODDLER!!!! AND I CANT JUST TELL HIM THAT WE CANT DO SOMETHING BECAUSE ITS HIS VACATION TOO!!!!," the post continued.

For the record, everyone and anyone who's been to Disney World knows crowds and long lines can be a pain. There are, however, ways around those inconveniences, like booking a FastPass and making reservations ahead of time.

Still, the woman went on to write that she thinks "DW is for CHILDREN!!!!! People without CHILDREN need to BANNED!! Mothers with children should be allowed to skip ALL THE LINE!!!"

"I f*cking hate childless women with a BURNING PASSION!!!!" the angry mom concluded her post.

A few days after the tweet went viral, the New York Post published an op-ed in response, in which the author accused millennials of having "an unhealthy relationship with Disney." The author of the piece — entitled "Sorry, childless millennials going to Disney World is weird" — claimed that adults enjoying Disney theme parks leads to "stupidity and culture ignorance."

Unsurprisingly, this mom's unconventional and extreme solution as well as the New York Post's response to it all ignited serious debate online. While some people agreed that Disney was designed for kids, others thought banning childless adults, and shaming them for going and enjoying the theme part, was a load of garbage.

"FWIW, Mickey and Minnie are a childless couple," one tweet pointed out.

Another person accurately noted, "FFS, a childless couple is still a FAMILY."

"'Why are millennials who can't afford to buy a house much less raise children choosing the innocent escapism of Disney instead of the cratered hellscape of society, economy, politics, and the environment left by their parents generation?'" one Twitter user joked.

One parent chimed in, "As a parent who took his kids to DisneyWorld a few years back, I would LOVE to go back and enjoy the rides and attractions without them at some point LOL. But seriously, what an embarrassment. Amusement parks are for everyone!"

One Twitter user joked, "get in childless millennials we're going to disney."

And finally one person pointed out, "WALT’S WHOLE GOAL WAS TO MAKE THINGS THAT EVERYONE COULD ENJOY... maybe stop shaming people for enjoying a freaking theme park."

Disney hasn't issued any formal response or statement regarding the post, but it's important to point out that Disney World does indeed have an adult guide to the parks for visitors without children. The guide, in fact, promises "Enchantment for All Ages ... Especially Adults!"

While I too hate waiting in line as much as the next person, it seems safe to assume that Disney won't be banning people without kids anytime soon or ever. For starters, that's discriminatory. What's more, bans are pretty much the opposite of joy and that's kind of Disney's brand. So, moral of story, all are welcome, with or without kids. And if lines and crowds really bum you out and dampen your experience, spring for the FastPass next time.