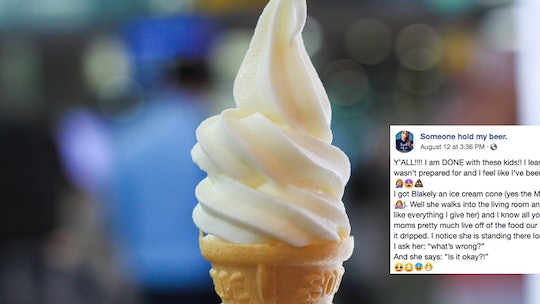 Ice cream is a summer staple that's virtually harmless, unless you're taking it from the hands of a shifty toddler, that is. Queue this viral post from one mom who might be put off frozen desserts for the rest of her life. Not only is the story pretty gross (seriously, it's haunting) but this mom offers a pretty good case about why you should think twice before sharing food with your kids.

Today's lesson in kids are the absolute worst comes from a mom named Sidney who runs the hilarious Facebook page, "Someone Hold My Beer." The mom took to her page on Aug. 12 to share a truly haunting story about what happened when she took a lick of her daughter's ice cream cone.

Sidney's saga started with an innocent trip to McDonald's to treat her 4-year-old on a hot summer's day, according to Cafe Mom. But everything went south pretty quickly from there, with Sidney sharing: "I got Blakely an ice cream cone (yes the McDonald’s machine was working). Well she walks into the living room and hands me her cone (half eaten like everything I give her) and I know all you moms have been there.

She continued, "We as moms pretty much live off of the food our kids don’t eat so I licked it before it dripped. I notice she is standing there looking at me like this. I ask her: 'what’s wrong?' And she says: 'Is it okay?!'"

"At this point I’m scared b/c I don’t know what just happened. I think maybe she dropped it in her room and was scared to say," Sidney added. "We stand there looking at each other and the ice cream cone. And this fool says: 'I accidentally wiped my butt with it.'"

Ga-ross! If your gag reflexes just kicked in, you're not alone. The story just gets worse from there.

But wait — this story gets worse.

Sidney continued, "Excuse me?!! With this ice cream cone I just licked?! Wtf!! I am coming unglued...so I ask this child 'How do you accidentally wipe your butt with an ice cream and WHY did you give it to me to eat????' She looks me dead in my face and says 'I used the wrong hand to wipe but it was just pee mommy.'"

Bright side, it was pee. Down side, it was pee! Poor Sidney may never eat ice cream again. The mom ended her post some appropriate hashtags, saying: "DONE! Someone come get these kids. I cannot even handle it. If y’all need me I’ll be washing my mouth out with Clorox. #whytho #shesaiditwasjustpee #allmylifeihadtostruggle #parentinglol #icecreamfail #mommyfail #4yroldproblems #neveragain."

Although this story is the absolute worst in terms of gross parenting stories, commenters had a few whoppers of their own, along with a few words of encouragement.

One user said, "My 3 year old gave me a gum ball once... After I began chewing it he told me that he had to wrestle it away from our poodles mouth so that he could give it to me."

And then there's this story from one parent that will make you rethink taking the last few drinks of your lukewarm coffee.

"My husband was taking too long in the store once. My daughter had to pee and couldn’t make it out so I grabbed an empty Starbucks cup and let her pee, planning to toss it as we drove out," they said. "I didn’t get a chance because instead my husband got in the car, started driving and took a big ol’ swig of instant regret."

And thanks to this commenter for summing it all up perfectly, writing, "Thanks. This was so funny. I seriously laughed for 5 solid minutes. We've all been there. Cheers to motherhood."

No one ever said having kids was easy, or sanitary for that matter. And many parents have some sort of story involving kids and bodily fluids, so ice cream and pee is pretty much on par with the ordinary. Thanks for the laughs, Sidney, even if you happened to be on the wrong end of the cone.