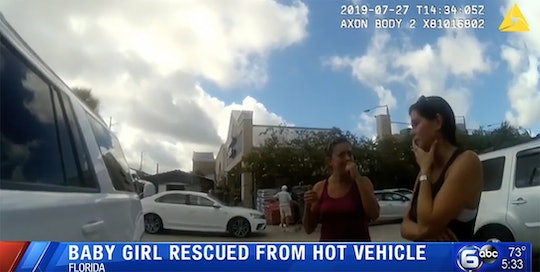 Running errands with a child in tow can require some serious multitasking skills, which is something I didn't fully appreciate until I became a mom myself. Now that I'm four kids in, however, I'm highly aware that babies and young children can be particularly challenging shopping buddies. And sometimes, getting all of them from the parking lot and into the store (and then back again) can be incredibly difficult. That's because so much can go wrong, a sentiment this mom who accidentally locked her infant daughter in a hot car touched on when she warned parents about key fobs.

Earlier this August, Christina Tufford took her 10-month-old daughter, Maddie, along with her to run an errand. “I just took her on a little stroll to Lowes to do some flower potting,” the Stuart, Florida mom told KVOA. And when Tufford got back to her car, she buckled Maddie into her car seat and used the remote start on her car's key fob to get the air conditioning started. As she loaded her purchases into the vehicle, she set down her keys on the seat and then accidentally closed the doors. It was when Tufford went to get into the car to drive home that she realized what she had done. “All the doors locked and she was inside with the keys,” Tufford said, according to People.

A key fob, in case you don't know already, is a technological device that can remotely "lock or unlock a car's doors with the push of a button," according to The Atlantic. And while this device is arguably convenient, it can be problematic because it can automatically lock doors.

In a panic, Tufford called OnStar (a vehicle communications system), only to find out her account had expired, meaning the company no longer had a connection with the car to unlock it, according to Inside Edition. About 10 minutes later, the car's engine shut off — and so did the air conditioning. Turning off the air conditioning is a safety design that prevents carbon monoxide poisoning, but unfortunately, this feature resulted in the car's temperature rising.

A police officer who arrived on the scene, Kyle Osinga, tried calling Onstar again, but he was also told there was no possible way to unlock Tufford's car by satellite. This is when Osigna became really worried, as he noticed concerning signs in Maddie. “I check on the kid a little bit later and the kid is not okay anymore,” Osinga told WPTV. “The head’s down and the eyes are closed. That’s when the adrenaline, that’s when I start to freak out.”

Fortunately, someone on the scene was able to smash the window with a hammer, successfully gaining entry into the vehicle and freeing Maddie.

Stuart Police Department did not immediately respond to Romper’s request for comment regarding this incident.

Following the terrifying ordeal, Tufford spoke out to warn fellow parents about key fobs in hopes that they don't make the same mistake. "I thought that I was going to lose my daughter,” Tufford told Inside Edition. “Be consciously aware of what you do with your key fob because you can lock your keys inside of it when the car is on.”

Additionally, both Tufford and her husband, Matt, now make it a point to carry a tool designed to break windows with a spring-loaded spike.

Pretty scary, right? And something like accidentally locking your key fob inside of the car can happen so easily. Especially if you're the parent of a small child and have a million different things running through your head at any given moment. Kudos to this mom for sharing her mistake so that, hopefully, other children won't find themselves accidentally locked inside of a hot car.

More Like This
Over 10,000 Sippy Cups & Bottles For Toddlers Recalled Due To Lead Poisoning Hazard
41 Strong & Sweet Baby Boy Names That Start With “K”
When It’s Safe To Bring Your Newborn To A Restaurant, According To A Pediatrician
Can You Burp A Baby Too Hard? A Pediatrician Shares Tips For Gassy Tummies