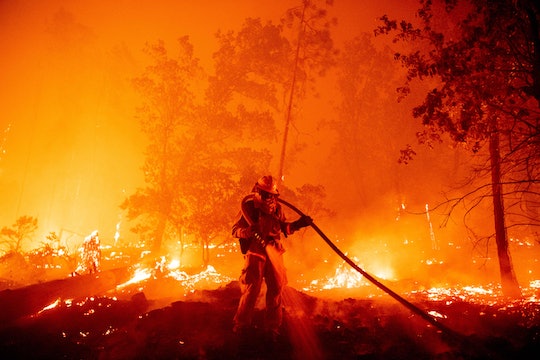 In 2008, pregnant blogger Jenna Karvunidis cut into a pink-colored cake to reveal the biological sex of her child to family and friends, thus inventing the gender reveal party trend popular among expecting parents. But now, the mom who popularized gender reveals has urged their end after one sparked a wildfire, again.

"The fire that evacuated parts of California is from a GENDER REVEAL PARTY," Karvunidis recently wrote on Facebook. "Stop it. Stop having these stupid parties. For the love of God, stop burning things down to tell everyone about your kid's penis. No one cares but you."

The California Department of Forestry and Fire Protection (Cal Fire) announced Sunday that an investigation had revealed the El Dorado Fire currently burning in San Bernardino County had been sparked by a "smoke generating pyrotechnic device" used at a gender reveal party. Since it was first sparked at El Dorado Ranch Park in Yucaipa on Saturday, the fire has burned at least 7,386 acres and resulted in evacuation orders being issued for residents in Oak Glen, Yucaipa Ridge, Mountain Home Village, and Forest Falls, according to Cal Fire. Evacuation warnings have been placed on communities in the Yucaipa bench area.

Unfortunately, the El Dorado Fire isn't the first wildfire to have been started as a result of a gender reveal gone wrong. In April 2017, an expectant father's gender reveal sparked a wildfire that burned more than 47,000 acres in Arizona to cause roughly $8 million worth of damages. In that incident, CNN reported the father had fired a high-powered rifle at a makeshift target, which exploded upon impact and caught the dry grass around it on fire. That dad was later sentenced to five years probation and ordered to pay back all damages, as Forbes reported.

Karvunidis, a California resident, criticized those who felt the need to blow something up to announce the sex of their child. "It was 116 degrees in Pasadena yesterday and this tool thought it would be smart to light a fire about his kid's dick," she wrote. "Toxic masculinity is men thinking they need to explode something because simply enjoying a baby party is for sissies."

While Karvunidis is largely credited with inventing the gender reveal after she blogged about the cake she used to reveal the sex of her eldest child to family in 2008, her feelings about the trend have since evolved. In fact, in 2019, she told Romper she "cringes" every time she sees a gender reveal.

"It's just turned into this massive fixation on gender as the all-encompassing, paramount trait of a person and it's simply not true," she told Romper.

But although she may have started the trend, Karvunidis has been careful to stress she doesn't believe reveals need to include explosives or other dangerous acts. "Of course I'm getting hate messages," Karvunidis wrote on Facebook on Sunday. "Excuse me for having a cake for my family in 2008. Just because I'm the gEnDeR rEvEaL iNVeNtoR doesn't mean I think people should burn down their communities."