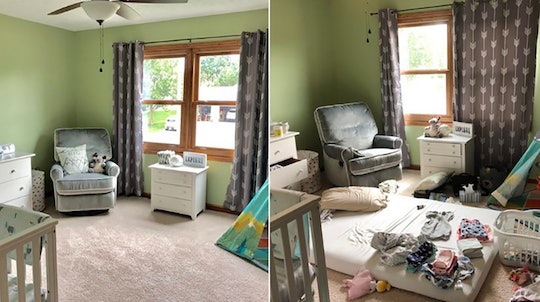 Rarely do parents get the opportunity to step back and witness life's daily transformations, those subtle yet powerful changes that can say a whole lot about where you're going and where you've been. But when you're a mom who has struggled with fertility, you're more apt to stand still and take stock of your life, for better or worse. No one knows this better than mom Amanda Long, who recently welcomed a baby girl after having difficulty conceiving. And to encapsulate her journey to motherhood, Long recently shared before and after photos of her daughter's nursery. Whether you've experienced fertility struggles or not, these shots are incredibly powerful.

Long took to Reddit's Baby Bumps forum Saturday to post photos of her national parks-themed nursery. Long, who is very active in the community, noted that the first pic was taken "3 weeks before birth," while the other shot was photographed "8 weeks after." The side-by-side photo shows a still and clean room paired against a nursery filled with clothes, a laundry basket, a bed, and open drawers. And although the "after" shot might seem overwhelming to some parents (those first weeks of parenting can be a doozy, right?) Long feels nothing but pride when she looks at it.

"I mostly feel pride when looking at these two pictures side-by-side. I was proud of myself for finishing the nursery while 37 weeks pregnant and so happy with how it turned out," she tells Romper via Reddit's messaging app. "That first picture brings back the feelings of excitement and anticipation that I had waiting on the arrival of my daughter. I sat in the rocking chair staring around the completed room dreaming about what she’d be like and how it would feel to rock her and read to her."

She also notes that while photo #2 isn't necessarily “Pinterest-worthy," she thinks "it’s a better depiction of the reality of life with a newborn." She finds this reality "more more beautiful because it’s more real."

Not to mention, the mess represents everything Long has been through to get to this point. And it goes without saying that her daughter's nursery, especially before her arrival, held special significance for her.

"I love the mess of the nursery because it means it’s being used, and for a while I didn’t know if that would be the case," she says. "We excitedly painted the nursery when we decided we’d start trying for a baby in 2017. I got pregnant on our first cycle of trying, but sadly that ended in a miscarriage."

After the miscarriage, Long tried to conceive again but it didn't work out. Long admits this is when her world started falling apart. "We shut the door to the nursery and mostly ignored it, but occasionally I would sneak into that empty room and sit on the floor and just cry," she explains. "Now this room is decorated and furnished and messy. Instead of having anxiety over a messy room, I feel relief that our dreams of having a baby came true. Messy is so much better than empty."

Now that Long has welcomed her daughter into the world, she hopes her story can help others because many people tend to suffer in silence. She says she turned to "food and wine" for comfort, instead of seeking therapy, something she has since done.

"We should be able to support each other in these times, or at least feel comfortable enough to seek support," she says. "I thought that by shoving things down I was being strong. But the strongest thing I did was admit that I needed help. I started therapy a year ago and it was one of the best things I’ve ever done for myself."

Now that Long is in the process of healing, she looks forward to the future she'll share with her husband and daughter. Speaking on the national parks theme for the nursery, she tells Romper: "My husband and I love the U.S. National Parks. Our travels to the parks have brought us closer in our relationship and we hope to bring our daughter along with us someday to share in that closeness. We hope her room helps instill a love of nature before we start traveling as a family."

Congrats to Long on the arrival of her daughter, and kudos to her for speaking out on this important topic.