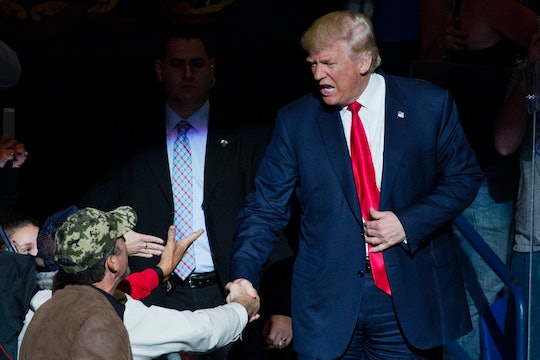 At Sunday night's debate, Republican presidential nominee Donald Trump dismissed a tape that revealed him bragging about allegedly sexually assaulting women as "locker room talk" and "just words." But that type of talk has real-world repercussions, as a woman whose young daughter was assaulted by a male schoolmate knows all too well. And now, that mother has an important question for Donald Trump.

In the leaked tape from 2005, Trump talked how he was "automatically attracted" to beautiful women, saying, "I just start kissing them. It’s like a magnet. Just kiss. I don’t even wait. And when you’re a star, they let you do it. You can do anything." He also referenced grabbing women by the genitals without their permission. Throughout the disturbing tape, he and Billy Bush — a former Access Hollywood host and the man to whom Trump was talking — were cavalier, as if assault was no big deal at all. Though both men later came out with their own apologies, the damage from the tape was done.

In response, one mom decided to speak out. On Tuesday, a woman named Jillian Maruskin wrote the following Facebook post (which she requested Romper not to link to). Her daughter's name has been redacted out of privacy:

So, this whole Donald Trump video leak is getting pretty personal to me. [my daughter] was assaulted last week by a fifth grader. He grabbed her right where Donald Trump said he likes to grab women. When she told him to stop he told her he'd grab her under her clothes if she told on him. Of COURSE she told on him. She did the exact right thing. So yesterday this boy approached her in the lunchroom and told her he knows where she lives and he's going to rape her mother.

I'd like to know Donald Trump's response to that. I mean, from his rhetoric, I assume he's fine with all of it.

This man cannot be president.

Maruskin and her daughter, who is in the fourth grade, live in Ohio. Romper spoke with Maruskin via email about the incident, which occurred during her daughter's after-school program. The boy was kicked out of the program immediately after Maruskin's daughter reported him. However, given that the assault occurred off of school grounds, the school itself has responded with a less than zero tolerance policy. Romper is attempting to reach out to the unidentified school for comment and will update with a response. According to Maruskin,

The principal has talked with the boy and told him to stay away from [my daughter]. When I asked how they'd enforce that rule he gave me this unsatisfactory response referring to the boy's time and record at the school and how he doesn't think he'll get violent towards [my daughter]. The thing is... he already has been violent towards her with the original assault.

And yet, despite the fact that incidents like this affect far too many girls and women, Trump doesn't seem to understand why his comments were a big deal. Though he later released an apology video (if "apology" means reciting a few insincere sentiments and then blaming everybody else), Trump continues to refer to the fury over the tape as a "distraction" from "real" issues.

The harassment of women and girls is a real issue. It's just that Trump has been privileged enough to perpetrate that harassment instead of experiencing it for himself. And as he has demonstrated numerous times over the course of this election, he lacks the necessary empathy to even begin to put himself in Maruskin's daughter's shoes.

As for what Maruskin's daughter thinks about Trump? Maruskin says her daughter describes the candidate as "a bully," even as Maruskin tries to shield her from the worst of his rhetoric. Mother and daughter went to a Hillary Clinton rally on Monday night and are hoping that soon, Trump's hateful and misogynistic invective will no longer receive a national spotlight. After all, the youth of America are listening.