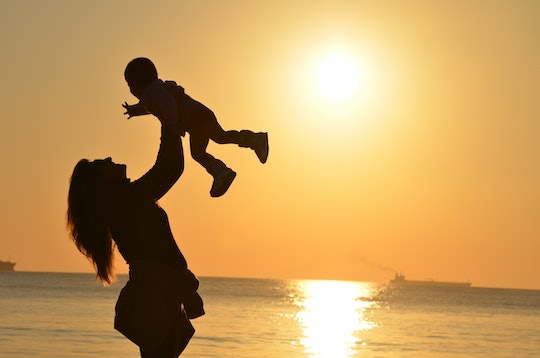 An Honest Look At Pregnancy After Miscarrying

Miscarrying is never easy for a mother. It can be straining on the mind and the body — and leave many women wanting answers to questions. Getting pregnant after a miscarriage can be just as hard on the soul — with mixed emotions of happiness and sadness meeting together. This mom writes about her pregnancy after miscarriage and her post is so heartbreakingly honest.

Allie Boss, a 26-year-old lifestyle blogger already has one child who is 2-years-old, according to US Weekly and is currently nine weeks pregnant with her second child. But Boss' road to announcing her second pregnancy wasn't always a well paved path — and involved a little bit of heartbreak in the process. According to US Weekly, Boss has lost two babies by miscarrying in the past two years. But just last week, in a now-viral Facebook post, Boss shared the news of her pregnancy and wrote about her fears announcing the pregnancy so soon. What came from that is an honest and heartbreaking post about the fears a mother shares — as well as the happiness a mother wants to have — from becoming pregnant after miscarrying a child. It is an emotion that no mother wants to experience — but Boss' words do help.

The beginning of the essay perfectly captures the mix of emotions a mother goes through during her pregnancy:

Pregnancy after miscarriage(s) can be a weird/hard thing. There's emotions that come along with it that you never expected. After losing 2 babies I question everything. Is that pain normal, why don't I feel sick, is the baby growing right? It's hard being pregnant after loss. It's hard being pregnant normally. I think its common to question symptoms. But its 100xs worse after loss.

It is understandable to be nervous or scared after experiencing a major loss — but some women might feel like they're alone in these feelings. According to The Huffington Post, Boss penned the essay on her Facebook page because "she found comfort in sharing her story on social media and discovering a community of women who experienced similar struggles." Boss is definitely not alone — according to the Mayo Clinic, most women who experience a miscarriage typically go on to have healthy pregnancies afterwards. But there is a small amount of women — 1 percent — that will experience two or more miscarriages, according to the Mayo Clinic. Boss' essay could serve as comfort for these women who are in this small percentage and have experienced such loss. Boss' essay ends on such a beautiful and positive note:

You should never feel like you have to hide a baby..a precious life..until after the first trimester. I want to celebrate everyday that I carry this baby. Heaven forbid something happens. I'm going to celebrate, share, and savor every single day. Because this baby deserves it. Because I'm growing a precious, longed for, prayed for and wanted life inside of me and that deserves to be celebrated from day one.

Mothers who have miscarried and get pregnant after should not have to feel scared or alone. Instead, they can choose to celebrate and Boss' words can serve as motivation to do so.