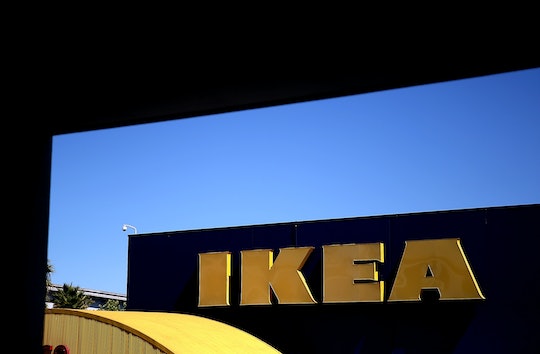 Crowded venues can be especially hectic with children, with parents needing to keep extra-close eyes on all that's going on. A Southern-California mom's account of alleged human trafficking during a visit to a local IKEA store will definitely put all parents on high alert, because the details of her experience are pretty scary. Romper has reached out to IKEA for comment but has not heard back at this time.

UPDATE: According to Covina Police Department public information officer Gregg Peterson, the alleged incident detailed in Diandra Toyos' post — which has since been made private — could not immediately be confirmed. "I saw this when it came out, but I am not sure if we were notified by the woman," Peterson told The Daily Beast, in a statement. "It definitely appears to be a stretch to consider this a human trafficking issue, but that is just my opinion." Romper has reached out to the Covina Police Department for additional clarification and comment on the incident and is awaiting a response.

In a separate statement to Romper, Diandra Toyos noted that she chose to make the post private to avoid further negative harassment from strangers skeptical of her account. "I updated [the public post] several times, trying to keep up with the questions people were asking in the comments," she said. "One of those updates included the fact that I am no expert in human trafficking. I never claimed to be. I'm simply a mom who experienced something that made me incredibly uncomfortable. I know something was off, and regardless of exactly what it was, the message behind the post was simply to be aware and present and pay attention when you're out with your kids." Toyos added that she had never intended for the post to go viral, saying that it had made her "uncomfortable," but noted the importance of keeping an eye on your children, regardless. "The truth is, we are given 'gut feelings' for a reason," she wrote. "It's important to listen to those feelings. As mothers, it's our instinct to protect our children, and to sense when something is off. That's what I did, and what I hoped to remind other parents of."

EARLIER: Diandra Toyos shared a lengthy Facebook post detailing just what happened to her while shopping for couches with her 1-year-old, 4-year-old, and 7-week-old kids. While shopping, Toyos "noticed a well dressed, middle aged man circling the area," who was encroaching on her family's space. "At one point he came right up to me and the boys," she remembers, "and instinctively I put myself between [him] and my mobile son. I had a bad feeling."

The man continued to circle Toyos and her children, "pretending to look at [merchandise] but looking right over at us instead." Toyos' mother was with her, also observing the oddity, when the two women saw another well-dressed man behaving the exact same way. "The area they were hanging around had an exit right by it," Toyos writes, speculating that "they could have run out that exit with my child and handed them off to someone waiting outside and been gone before I could find them." Toyos and her mother "spoke quite extensively with the head of security" at the store before leaving.

Toyos' post has gone viral, with over 100,000 shares and plenty of commentary. Many are questioning her story, which has since caused her to update her message. "Since this post has been so widespread, I wanted to use it to point you to a couple of really good resources if you're interested in learning more about human trafficking or how you can help. www.IJM.org and www.a21.org are two great resources," she provided.

Whereas being extra cautious and aware is always a good idea, authorities are also still skeptical about the situation. "It definitely appears to be a stretch to consider this a human trafficking issue, but that is just my opinion," insisted Gregg Peterson, public information officer for the local Covina Police Department. Though "anything is possible," admits Human trafficking expert witness Dr. Kimberly Mehlman-Orozco, "It’s not like a Hollywood movie. People aren’t coming up and kidnapping victims like in the movie Taken."

Thankfully, Toyos and her family left the IKEA unharmed. Though their motives were unknown, the presence of two, unknown, middle-aged men staring at and following a family through a labyrinth of a furniture store is absolutely unsettling. When approached, though, Toyos recalls that she immediately took to her kids to protect them: "You kind of kick into survival mode, I guess," she shares.