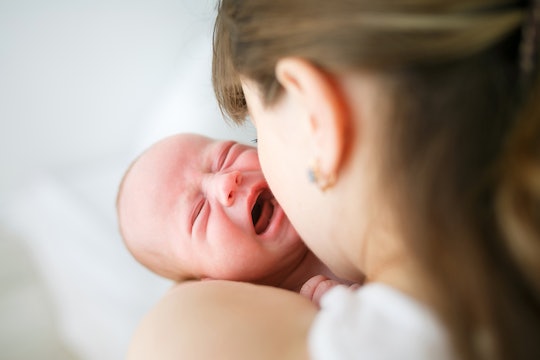 When your infant is fussy, what's your go-to move? Sing them a lullaby? Let them cry it out? Try for a feeding instead? According to new research, across the world moms have the same reaction to crying babies. A study published in the Proceedings of the National Academy of Sciences on Monday found after analyzing 684 first-time mothers from 11 different countries, that some obvious patterns emerged. All of this new information gives some further insight as to how the brain re-wires itself in response to motherhood. So, cultures notwithstanding, all mamas tend to act the same to calm their babies down — and even the brain is able to reflect this.

To gather the necessary information, scientists analyzed videotapes of mothers from Argentina, Belgium, Brazil, Cameroon, France, Kenya, Israel, Italy, Japan, South Korea, and the United States. Ultimately, the mothers were most likely to respond to their crying five-month-olds first by picking their children up and talking to them, according to CNN. Though this might not seem like totally groundbreaking information, the neurological implications of a uniform set of gestures are pretty significant.

For a second tier of research, researchers leveled-up by using MRI scans to analyze the brain responses of 43 first-time mothers in the United States and 44 in China, looking for what changes happen upon hearing their babies cry. The brain areas that activated are best labeled as those used for "readiness" or "planning," New York University neuroscientist Robert Froemke told CNN (who, it should be noted, wasn't directly involved in the study).

According to the brain scans, the babies' crying "triggered the moms' brains to move and prepare to talk, even before the mothers had necessarily processed what was happening and what they needed to do," TIME explained. So, just "within 100 milliseconds of the onset of an infant cry, women show a motor-evoked response associated with arm movement," the study's lead author Marc Bornstein, who functions as chief of the National Institute of Child Health and Human Development's section in child and family research, told CNN.

All of that's to say, the so-called "maternal instinct" is deeper than anyone previously thought. So, in a way, mom' brains are tangibly different than non-mom brains. Bornstein explained the ultimate significance of the findings to CNN:

Infant cry excites some adults, mothers included, to respond with empathy and care but others with neglect or even abuse. Infant cry is a trigger to maltreatment. So understanding how mothers normally respond to cry at the behavioral and nervous systems levels is potentially telling.

According to the study, Bornstein predicts that this information can help to understand the mental state and mental health of moms who respond atypically to their children's needs. "We hope this research will spur others to study brain responses associated with non-normal variations in parenting, such as mothers who maltreat," Bornstein said, according to News-Medical.

It raises a pretty significant question: is "bad" or improper parenting informed by environment, or by the wiring of one's brain? Odds are it's both, but more research needs to be done, of course.

"Mothers, based on their personal experience, could easily have their brains shaped in a matter of a few months to be especially sensitive to an infant's cry, perhaps because of hormonal changes that occur with parenting," Bornstein said, according to CBC.

Parental evolution is key to keeping kids safe and taken care of, and findings like these help scientists help moms help their kids. Because, at the end of the day, pretty much all moms want the same things for their infants, whether they're right here in the United States or further off in Europe, Africa, Asia, and beyond.

More Like This
First Look: The New Jujube x Lilo & Stich Collaboration
Prince William Opened Up About Living With Grief In A Raw Speech
You Can Walk Through Barbie's Dreamhouse & Fulfill Your Childhood Dreams This Summer
Parents Who Ran Marathon With 6-Year-Old Share Statement After CPS Visit