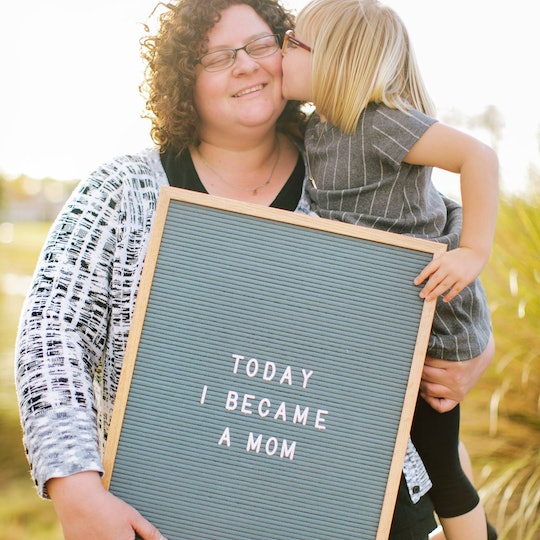 This Adoption Day Photoshoot Will Make You Ugly-Cry

Millie Holloman may be the only one who signed the papers to make her foster daughter her adopted daughter, but that doesn't mean it was a solo journey. In fact, this mom's "adoption day" photoshoot included just about everyone in her life that was involved with the adoption process — and the result was absolutely awe-inspiring. On March 7, the North Carolina wedding photographer adopted 5-year-old Vera Wren and recognized everyone from family members to friends to the judge in the case for being a part of the big day, the path that led to it, and mother and daughter's future as a family, too.

"They’ve been through the ups and downs with me. They’ve supported me when I called crying after court hearings or given me a shoulder to cry on when I’ve had to buckle kids in their car seat and send them off with another family to love," Holloman wrote in an emotional Facebook post the very day she (officially) became a mom after fostering the little girl she calls Wren for more than a year. "They have fallen in love with these kids and they have prayed big prayers for us all. They have stepped up and filled in the gaps for the roles I can’t be to these kids. Today they cried great big tears and they celebrated alongside us!"

As Holloman recently told Scary Mommy, she didn't take many of the photos because she, of course, wanted to be totally, 100 percent present in the moment. So, her colleague Matthew Ray took on the responsibility of capturing the images of everyone who came out to the monumental event, all holding signs that detailed exactly what the celebration meant to them, The Huffington Post reported.

First, there was the judge, grinning from ear to ear, clutching a sign that read, "Today I saw a happy ending."

Holloman's adoption attorney, Grayson Cheek, was clearly ecstatic to have been a part of making the adoption happen, as well, holding up a sign that read, "Signed, sealed, delivered, she's yours."

And the new mom's best friends were there supporting her, too, the two of them holding up a sign that read, "Today, our prayers were answered for our dearest friend."

The happy grandparents were obviously more than happy to be a part of the uniquely beautiful situation, departing from the usual tradition of meeting their sixth grandchild at a hospital, and meeting the happy new (official) family at the courthouse instead. "They are my role models for what parenting looks like and with that in mind, I'm sure to succeed," Holloman captioned the Facebook photo of her mother and father.

Even the little kids got in on the action, with a boy cousin holding a sweet sign that declared humorously, "Today we're still outnumbered" (the addition of Wren to the extended family means that are are still more girls than boys... sorry little guy).

But, of course, the simplest message was the most powerful one: "Today I became a mom," Holloman's sign read, the new mom holding Wren in her other arm, her daughter kissing her on the cheek.

But there's more. Over on Holloman's Instagram page, a toddler, pictured only from the nose down, held yet another sign. "I'm next," it read. In the caption, Holloman confirmed the happy news: She's in the process of adopting 18-month-old Ford, too.

Wren's adoption day celebration will certainly be hard to top, but knowing Holloman and the rest of her happy circle of friends and family, Ford's big day — whenever it comes — is pretty much guaranteed to be just as sweet.