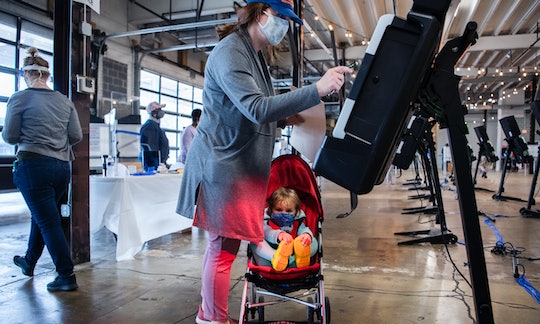 Moms Are Angry All the Time — Will This Election Finally Make Us Feel Better?

It was a Sunday afternoon. By all definitions, I should have been relaxed; I completed every item on my to-do list and finally stepped outside for a brisk walk in the perfect autumn air while my 3-year-old stayed at home, reading books with her grandma. But instead of feeling at peace, I soon grew absolutely incensed: my face flushed with heat, heart racing, completely on the verge of yelling a string of expletives.

Nothing stereotypically fury-inducing caused my anger on this other innocuous fall day. I didn’t spot a speeding car hurtling down the quiet street or a group of catcalling men on the corner. Rather, I merely noticed a bunch of kids pouring into a nearby house dressed in Halloween costumes, none of them wearing face masks.

The sight initially left me feeling startled, given that my Massachusetts town mandates face coverings in grocery stores and schools, and Halloween itself is all but canceled. But more to the point, it enraged me, this reminder that while I’ve been staying at home for nearly eight months, not seeing friends, completely putting my world on pause, others are going about their lives as though everything is normal, as though 228,000 people (and counting) haven’t died, as though we’re not living through the most historic pandemic of our time. It feels, without exaggeration, like I'm living in a different universe.

For those of us who have followed the rules while much of the world pushed on as normal (and the president advised the same), anger has become the baseline.

Such infuriating nonchalance in the face of national despair has undoubtedly been bolstered by President Trump’s continued downplaying of COVID-19. From the start, he has dismissed the severity of the virus, and has also been a proponent of misinformation surrounding the pandemic. And despite CDC guidelines encouraging the use of face coverings to mitigate spread, Trump has held massive indoor rallies where many attendees have been maskless, along with a now-infamous Rose Garden event that ended up becoming a super-spreader, all while propagating inconsistent messaging surrounding masks. The president’s dismissal of mitigation tactics is made even more infuriating when you consider health experts’ conclusions that if everyone wore masks, the virus would be under control in a matter of weeks.

Yet here we are more than seven months later, with health experts warning of a dangerous increase in cases and deaths as the winter months approach. For those of us who have followed the rules while much of the world pushed on as normal (and the president advised the same), anger has become the baseline. And for moms — many of whom have taken on the brunt of childcare and housework, sometimes at the expense of their careers — that red hot anger is tenfold.

Take it from Dr. Avital O'Glasser, a physician and mother of two, who described this year as the “most stressful” months of her life. “I'm on the frontlines at work, and balancing professional obligations with keeping my family safe has been daunting,” she tells Romper. “I've been stressed, short-fused, and burnt out. There aren't enough hours in the day.”

With very few outlets for our anger right now, moms ... have been laser-focused on the upcoming presidential election as a beacon for potential change.

Shannon*, a high school history teacher from Houston, Texas, also feels like she’s short-changed on time. Her son’s first grade class is completely remote, as are her own classes. Her partner works from home too, setting up a scenario of constant juggling and zero time to recharge, leaving her feeling irritable and on edge all the time. “I know we have privilege in our situation... we have been able to stay at home since the pandemic started, which a lot of people cannot do, and we are grateful for that,” she says. “But it's still really hard; my son hasn't seen his friends in months, and we’re worried about how this might impact him in the long-term. My partner and I don't have any independence, which is so important in relationships and in parenthood.”

With very few outlets for our anger right now, moms like O’Glasser, Shannon, and myself have been laser-focused on the upcoming presidential election as a beacon for potential change. O’Glasser, who has been more involved this year than ever before, has been writing postcards with to encourage others to vote and ensure they have the resources they need to do so safely. “I had all this anxious, nervous energy, and I had to find a place to put it,” she explained. “Sitting down and writing postcard after postcard, it feels like I’m doing something. It’s actionable, it’s tactical.”

Shannon has also been writing letters, in addition to phone and text banking. “Taking action has made sense to me because it feels like something tangible I can do, especially in a time when so much is out of our control,” she explained, noting that her efforts in 2020 are like “night and day” compared with 2016. “This time around, I don't think any of us want to take any chances. It feels like an emergency.”

Dr. Shikha Jain has felt similar alarm bells. As a medical professional and mom of three kids, she found herself growing frustrated with the increasing amount of coronavirus-related misinformation spreading online. In turn, she and several other physicians formed the group IMPACT, an Illinois-based organization designed to empower others with evidence-based solutions and information.

“Through our action and advocacy we have been able to...amplify voices of experts and scientists, and advise the governor's office on steps to take during the pandemic,” Jain explains, adding that IMPACT has partnered with the ACTION Project and VoteHealth 2020 to inform others how to vote safely during the pandemic. “Our group is non-partisan, because we are focused on educating everybody, regardless of their political leanings. In order to get this pandemic under control, we need to reach as many people as we can.”

Sharing her knowledge with others has turned out to be a successful coping tool for managing her anger. “I feel like I’m doing something to make a difference,” Jain says. “Many of us were so frustrated and despondent that the science was not being followed, or that people were getting their information from sources that aren’t evidence-based. But I’ve been turning my anger into something positive, and hopefully saving some lives.”

In many ways, activism has been a helpful outlet for myself as well. Like O’Glasser and Shannon, I’ve written letters to voters in swing states, and have been sharing resources about how to make a voting plan. And it helps in the moment; it feels productive, and it's a tangible way to make an impact. But ultimately election day will determine whether our actions actually affected overall change, and it’s emotionally daunting to imagine an outcome that tells us that we just didn’t try hard enough. What will we do with that anger? I don't think any of us have an answer right now.

And yet, that kind of worst-case scenario thinking isn’t always helpful. It’s always good to be prepared for any turn of events, but at this moment, in these final days before the 2020 election, we can still take action. As Shannon puts it, “Moms have it so hard these days. We've always had to be everything to everyone and that's pretty much exploded in the pandemic. Use your anger, put it into your activism — and put it into your vote. We are not helpless.”

*Interview subject requested to be referred to by their first name only.