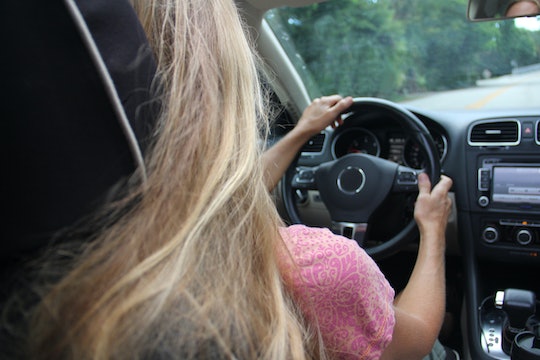 Now more than ever, moments of peace and quiet for many moms are few and far between. Social distancing measures and stay-at-home orders are leading to some serious cabin fever, so lots of moms are heading to their cars to blast music while driving around aimlessly by themselves to have a moment alone during quarantine, a recent survey conducted by Spotify and exclusively shared with Romper has revealed.

Spotify's timely survey of more than 3,000 moms in Australia, Canada and the United States, conducted in late April and released today, explored how moms are feeling during this difficult time and the ways in which they use music to escape and connect. And, unsurprisingly, many moms reported feeling stressed, with 34% reporting that they've driven around with no kids in tow and no destination in mind while listening to their favorite music to get a moment to themselves.

The global survey also found that 67% of moms said they’re taking things one day at a time during the coronavirus pandemic, while 30% described their current mood as "frustrated." Another 30% said they were "anxious" and 35% said they have cried along to a song in the last month.

Along with taking a solo drive, moms who want to listen to their favorite music in solitude also reported heading to their bedrooms (34%) and going for long walks on their own (30%). Additionally, 53% of respondents said they have used music in the past month as a means of escaping and tuning out their families.

Before you judge moms for sneaking off for some alone time, keep in mind that research has shown that music is a powerful tool when it comes to relaxation and mental health. Everyone is under a unique level of stress right now and when it comes to relieving that stress, a drive around the block with music playing is a pretty healthy — and socially distant — coping mechanism.

And for those looking for their next banger to jam out to, Spotify has released a special Mother's Day playlist that's perfect for doing chores, cooking, working out, driving around, or whatever you'd like while listening. Keep an eye — or an ear — out for that and get ready to unwind.